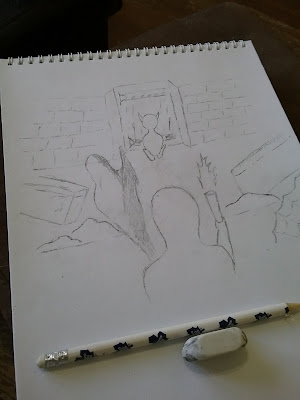 5 The layers of dust on the floor have probably been here for centuries. The large room contains a stone coffin, the lid lying against it. There are a few bookshelves filled with musty tomes, a small open chest with coins spilling out, and two large barrels. On a small table is a book laying open, a quill and ink sit beside it.

This is the room of a dwarven vampyre named “Gaziel”. There is a 1 in 3 chance that the Vampyre is in this room. If he is not then he is wandering the dungeon. He was turned years ago, and has only recently woken up from a deep thirty year sleep. He is unaware of the recent changes that have happened in the underworld. He will not outright attack the players, as he’s recently fed on the goblin’s inhabiting the dungeon. When he was turned he fled the small dwarven city and lived in seclusion, feeding on whatever monsters lurked into his tomb.

The book on the table is the diary of Gaziel and details a lot of his undead life. Most of it seems to be ramblings of a madman, with small tidbits of truth.

If the bookshelves are searched, a few interesting tomes will be found:

Death & It’s effect on life - contains 2 - 1st level healing spells, which can be ripped out and used as scrolls (Cure light wounds, Bless). Worth 50 GPs.

The Unusual guide to the world below - A tome detailing some of the unfortunate monsters that inhabit the underworld. Worth 30 SPs.

Magical Properties of fungus - A interesting read regarding the use of fungus and it’s healing properties. - 15 SPs.

The barrels in the room contain a rotting fungus mixture that smells unbelievably horrible. Eating any of this will inflict 1d6 damage, save vs poison.

The treasure chest is a trap. At the bottom of the chest is a metallic machine hand, that will grab any arm that gropes around inside looking for coins. The arm makes an attack roll against the players armour class, on a successful hit it attaches itself to the players arm. It does one point of damage per round as it holds on. The only way to get the arm to let go is to find the secret button hidden on the side of the chest, a successful find and remove traps roll will locate the button. Alternatively the arm can get cut off. The coins are all fake and worthless.


Posted by shanepatrickward at 7:07 AM