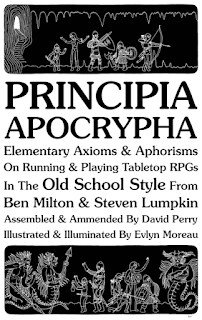 If you haven't heard about the new old school primer that's making the rounds I'd be amazed.  It's called Principia Apocrypha.  Written by Ben Milton & Steven Lumpkin, illustrated by Evlyn Moreau.  You can get it here: https://lithyscaphe.blogspot.com/p/principia-apocrypha.html

BTW this isn't a review just yet, more of a pondering.  First things first, I'm really glad they made 2 versions of the document.  One for printing and one for mobile.  Smart!

While reading the primer, I found a chapter on NPCs and the following struck me:

Give NPCs a motivation or concern that doesn’t involve the PCs. This lends them some depth and grounding, as well as giving the PCs a lever to pull, if they can find it.  (from the NPC's aren't scripts section). 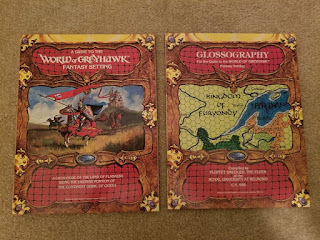 Every time I write something for home use, or publishing, this never crosses my mind. I've been thinking a lot latetly about world building and game prep.  At some point in time I'll be running more games and I'd like to be prepared.  Since I've settled on Mystara (although that might change.... see below).  The town of Luln struck me as a interesting place for a home base.  For the sake that its on the border of the evil Black Eagle Barony.  Using the above suggestion, I'd like to spend some time working out NPCs for the town.  Nothing major, but just back fill their personalities a bit more.  And of course fill the town with a bunch of stores etc.  I may even setup a crazy tent preacher on the outskirts of town.

I look forward to reading the rest of Principia Apocrypha in my spare time.  Anyways, check it out when you get some time, it's super awesome!

Yesterday I started working on a new character for our upcoming 5e session.  I'd posted about it on G plus.  The idea of a thief who basically steals for the thrill and then gives away the loot.  The build (I can't believe i just said that....) is a straight up rogue with a noble background.  I went over to the wotc basic D&D rules online and copied and pasted everything into a word doc.  Of course after I finished I had a few concerns and questions about rules.  Specifically the whole mulit classing thing.  I'm supposed to create a 9th level character, so I decided 8 of rogue and 1 of wizard just for giggles.
(BTW I think I cleared up my issues).

However, as usual I had a bit of "do I really want to play this PC?" in the back of my head.  I decided for saftety sake I'd print off the pre gens from the wotc site for the halfling rogue & the human fighter.  The fighter is very appealing to me, although the DM suggested they party really needs a rogue.  The only problem I had was the pdfs were sized at 8.5" x 10.9" .  When I went to print it (I scaled to fit, and tried actual size) the printer started beeping at me "hey you! you need to put in the correct paper size!"

Alas I had to dump the file into GIMP and resize just to be able to print.

So I think in the end I'm going to just play one of the two pre gens for ease of everything is on the sheet.  Probably the rogue.  (fuck I hate using that term, it's a damn thief).

In other news I scored a copy of Greyhawk from 1983, including 2 near perfect maps, 2 books, the box and a copy of "judges survival tools for Indiana jones!".  I got all of this for 10 BUCKS CANADIAN!!!!

Frank T said "pics or it didn't happen".  So here's the pic: So just in case, if you are wondering what I'll be up to this weekend, reading!

Oh and I think we are going to do a new Star Trek movie marathon with homemade pizza.

If you get a chance head over to gothride manor and check out the latest episode of Tims podcast.  I'll be doing a response podcast very soon (possibly today).

These episodes are targeted at individuals like myself who are small-time publishers not back by the companies. I want to share my experience with the process and I am hoping others join in the conversation to share their experiences. 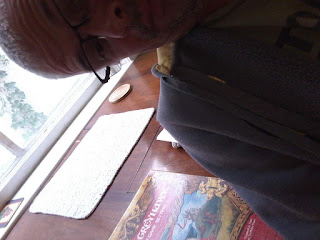