Session 0 - we are off to the arena? Mega dungeon Mondays 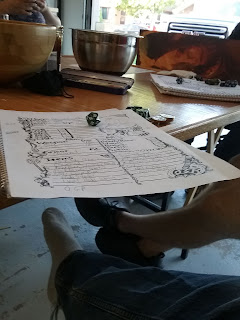 Tonight we started a new game, playing a house ruled version of basic fantasy. (the gist is that we use adv/dis and inspiration from 5e the rest is the bf chassis).  We all started as fifth level characters but had no equipment or spells.

First scene we were stuck in metal cages on a cart going thru the country side. A halfling npc named Jeff managed to escape but was quickly killed by the "cannibal forest" that we were going thru.

We quickly realized that we are on the way to a large coliseum. Where it appears we will be fighters in the arena.

While in the cages we started talking to a few people and meet this nice dude named Randy, who is a fisherman (whoever there are no rivers or bodies of water close by).  We get to our destination and are quickly put in cells.  All the rest of the prisoners don't have any recollections or memory of how they wound up in the cart.  The next morning we are introduced to a orc named MORGUK, who has apparently been in the fighting arena for a long time, and is now our trainer.   We proceed to the arena to train to fight.  A few days go by and we are finally given weapons (still no equipment however).

The arena is large stadium seating etc.  In the centre is a LARGE BLACK tower.  Apparently the winners go there, and get the fruits of their labours (ie big orgys, all you can drink etc).  The tower is very phallic shaped.....

The big day finally comes and we are ready to fight.  We make our way into the arena and have to face off against another pile of prisoners led by a large orc (similar to MORGUK).  Unfortunately there was no chance to escape as we were being watched closely by guards.  The battle enues!

The wizard and the cleric start to slowly remember spells (only 1st level ones).  After a few rounds of battle, the wizard wanders off to the east trying to find a way out, or a secret passage.  He is successful in finding a way up into the stands.  We keep fighting, slowly backing our way over to the east wall.

There's a joke made about the "great big spaghetti god in the sky", to which my cleric now believes is the deity he follows.

Finally we get to the wall and start trying to climb up.  We have to face off against orc guards wearing leather armour with "security" written on their lapels.

There's mass panic in the crowd.  Much of them wear MORGUK jerseys (apparently he is a fan favourite).  In the mean time he is slaying people left and right (including members of our team) He wants in the black tower.

We make our way up the stands, kill the guard and make a break for it.  I charm the rest of the guards and we escape onto the road with all of the audience.

Talking with a few NPCs in turns out that we are on our way to "Fleshmound" a small village not far from the arena.

We get to the town and goto the one tavern (which I can't remember the funny name).  There we find a few games of chance including one called Gold Fish!  Which the gist of is:  You put a fish in your mouth and attempt to drink a pint of ale without swallowing or spitting out the fish.  This continues with 2 fish, etc.  Since I have nothing to bet but my mace, I put that on the line.  And sadly loose it.

At this point we decide to call that a session and make our way home for a good rest.


Posted by shanepatrickward at 6:48 AM