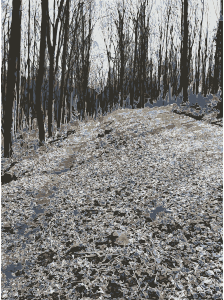 1.  A local ranger hasn't been seen in more than a month.  She/He will usually show up in town once a month.

2.  A group of halflings emerged from the forest missing limbs and bleeding. They are unable to speak.

4.  A rolling fog/mist moved thru the forest border, paralyzing anyone in its path.

5.  A alchemist needs some specific plants that grow in the depths of the forest.

6.  A curious map has been created near the entrance to the forest, it details the route of a previous group of explorers.

7.  Giant spiders have fled the forest. What scared them?

8.  An elder tree has grown sickly and black, it's disease has spread to the surrounding forest floor.

9.  A local merchant has had his shipments go missing, sort of.  The carts magically return thru the forest, carrying no merchandise, save for promissory notes.

10.  A group of near human Neanderthal's have been pillaging the borders of the northern forest.

11.  A monster, that can only be described as a "pastiche of parts", has shown up on the outskirts of the village.  It is unable to speak, but signs towards the forest with fear in its eyes.

12.  A river runs thru the forest, the fish in it have doubled in size, so have their teeth.


Posted by shanepatrickward at 2:20 PM