Goblin's Henchmen posted up on mewe that he intended to do the one page dungeon contest.  I haven't done it in a few years, so I think I'll take another crack at it this year.  If you are interested (you only have 3 weeks so get on it!) https://www.dungeoncontest.com/

I will probably use this map.

I had a super wonderful time with what I'm calling the "Global Crew" on sunday morning playing black hack with Matt Jackson.  We had about 3 rooms or so left to go.  And we managed to complete the adventure!  The ice queens' reign of terror is at an end.

We started off in a room with a large pool that we had to cross, it was basically sloped inward so I had to make a pile of dex checks to try and get across (thankfully colin was smart enough to tie a rope to my ass and stake it down).

After that (honestly feels like a blur, we played for three hours).  We managed to get across the room, and then had to fight some evil water/ice demon thing.  As a typical thief I headed for the hills leaving Colin to fight the darn thing (Seriously sorry Bud!).  We finally get to what we believe is the last room, I open the iron doors and see the following: 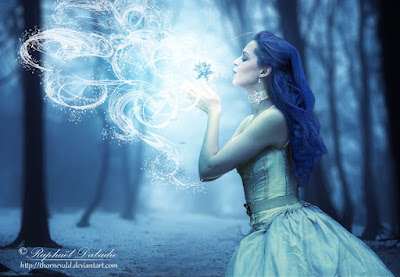 A large room with skeletons hanging from columns, each skeleton has a jewel connected to the column.  At the very end of the room is a set of stairs leading to a sorta audience chamber, on it is a throne.  The Ice Queen is sitting on the throne and bid's us welcome!

I being an asshat, decide to moon walk into the room, do a spin o rama, and end up on one knee with my bow aimed at her head.  I yell "your reign of tyranny is over bitch!".

The rest of the guys nonchalantly walk in the room and check it out.  Turns out we are somehow connected to these skeletons and the queen starts referring to us by ancient names.  Somehow in her head, we are loyal followers.  This has to do with these weird ice bracelets on our arms.

I decide to make a run for her crystals that are also on columns beside her.  grab one, get super friggin electrocuted!

In the meantime the rest of the party is attempting to negotiate and not having much luck.  The wizard grabs one of the crystals by a skeleton, dies and becomes an NPC in league with the Queen.  I blast her with an arrow which she deflects with this wall of ice (so much for that plan).

I make a bee line for the other crystal and smash the shit out of it.  Colin I believe destroyed the other one, and it a large wisp of ice and smoke she is banished to the nether world.

Unfortunately I had to leave at the final climax of the adventure due to "ice-based religious practices."

All in all it was a wonderful experience, I really enjoyed playing with a bunch of old schoolers, and Matt is a wonderful GM! And somehow Jax managed to survive! Hopefully he can return for another adventure.  By the sounds of it we might be playing a Isle Of Dread kinda game next.  Matt has been working on a mashup and I'm excited!

Side note funny conversation:  Just before the game Matt was talking about having saw a movie on the weekend, and went out for wings afterwards at "Buffalo Wild Wings".  I haven't been there in a long time!  Coincidencely a friend of mine had posted on facebook that he wanted to go to Texas Roadhouse and he posted the map/route to get there.  ETA was 3 hours 248 KMs.  So I referenced that in the convo "DAMN IT I WANT WINGS, BUT THAT'S 3 HOURS AND 248 KMS!".  Colin goes "Don't feel too bad Shane, it would be about 14 hours on a plane for me" LMFAO.


Posted by shanepatrickward at 7:50 AM