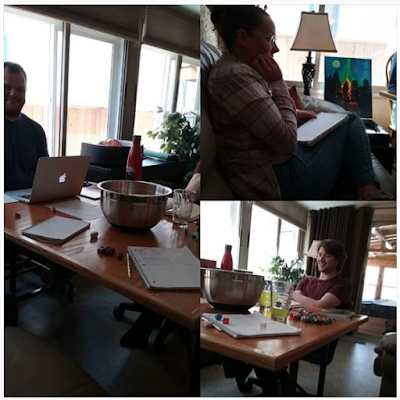 We had a really fun time playing D&D on Sunday.  It was Justin's first time DMing and he did a wonderful job.  It was mechanically basic D&D I suppose, really rules light without a lot of worrying about the rules.  The dungeon was super interesting, each room had 8 doors that connected to other rooms.  Nothing happened in hallways.  Thankfully we were able to find a few clues in the dungeon, one of which was the map.  My nephew kyle (who needed a bit of a break) had almost figured out how the dungeon worked prior to us getting the map.  Smart kid!

When I created my character I decided to call him Twix, I was originally going to just use the stats from my black hack character Jax Windlehen but decided against it.  Thank god I did, as I died 3 times in the game.  At one point I thought it was going to be a TPK.

So I called myself Twix, and then my wife decided her character was "Oh henry" and my nephew went with Snickers.  So we were the Three Musketeers! or the Chocolatier Three.  Whichever you'd like.

The premise of the dungeon was that a lot of adventurer's have went and checked it out but none of have returned.  We got there, met with an old man (who was sorta ghost).  He locked us in.  (totally dusty door! hahaha).

The rooms were all super interesting, some were straight up fights, while others were maze rooms, or puzzles.  Thankfully there was a medical doctor in one of the rooms! Which saved my ass 3 times.  (without paying the cost of Resurrection).  We found out we needed to find 3 artifacts that would essentially kill the old man, releasing all of the ancient prisoners from the dungeon including the doctor.

Justin was kind enough to give me a copy of the adventure.  However it's in mac pages, so I'll see if I can get a shareable PDF shortly!

I think he did a bang up job for someone whose never written or DMed anything!

I spent the Sunday being inspired working on pre gens for whitebox.  The intention is to run Isle of Dread next (which I've been chomping at the bit to run latetly).  Coincidentally in my facebook memories I found a post about buying Isle of Dread & the forbidden city! $12 CAD hahaha.  Which was from a few years ago.

One thing I've done with the pre gens is to setup a second sheet with consumables.  Hit points, etc.  which can just be crossed off.  See screen shot. 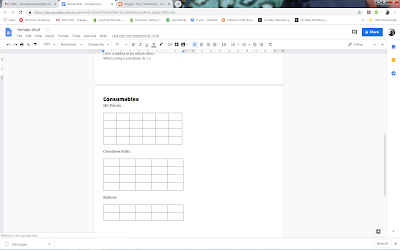 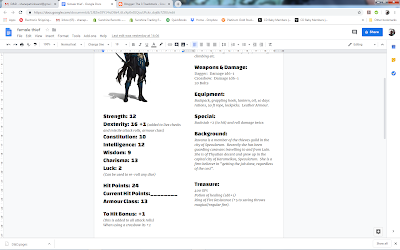 Posted by shanepatrickward at 6:54 AM