Enjoying the sites of Specularum - Play report Isle Of Dread 1 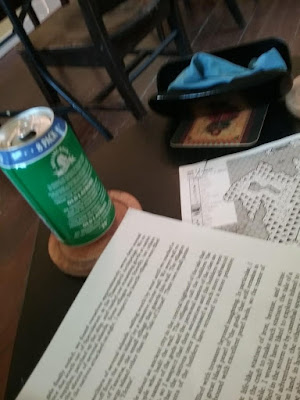 Last night was a blast!  It's been a good 3 years or so since I ran a game.  Obviously I was a bit anxious and out of practice.  I think it went quite well however.  The nice thing about using a game like b/x or whitebox is that the rules don't really get in the way.  There was a few times when the characters were interacting with NPCs that if we were playing fifth ed, it would have just been a roll.  In the case of last night, it was a role!

The story starts out simple enough.  The PCs don't really know each other that well, but are comrades at arms guarding a caravan.  The caravan is making its way from the small village of Luln, to the big city of Specularum.  The PCs have been hired by a contact in Luln to perform the job.  He claims he is a member of the merchants guild (it turns out slightly differently, the PCs were hired by the Radu Clan).  A day passes, and then in the evening a HUGE thunderstorm rolls in.  The PCs decide to press on thru the night.  (YES!).

A wagon gets stuck in the mud and overturns, spilling out most of its contents.  Curiously one of the PCs finds a map, and a tale of a lost island with treasure.  The rest of the papers don't seem to contain any other information, and for that matter the letter and map are out of place.

The caravan is quite long, including some stragglers that followed along (farmers selling their crops, immigrants,etc).  The 5 main wagons make it into the city without much excitement.  The PCs drop off the goods at the Radu Clan headquarters/warehouse and get set to get paid.  They meet up with Reginald Blackwater (I know I stole that name from somewhere, but not sure where?).  He's a portly man, with overly expensive rings on his fingers.  The radu clan headquarters is right out of jabba's palace, with trophies on the walls and art that shows off their immense wealth.  There is a long winded discussion about getting paid, and a question on boat pricing.  The merchant isn't completely told about the Island, but he now has his suspicions.  He offers to help the players out, but wants 25% of any treasure they might find on their mission.

Two of the players head off to the "starboard seagull tavern" on the docks, to see if they can scrounge up some information.  The barbarian stays behind and plays cards with Reginald, and tries to pump him for more info.  Reginald tells the barbarian about some deaths that have been happening in one of the poorer districts in town.  It almost seems like a werewolf is on the loose (judging by the phases of the moon, it may strike soon!).  Obviously there's a bounty on the monster, and the guards basically don't give a shit about the poorer districts of the city.

*Note:  The PCs didn't take the bait on the werewolf idea (I figured if they needed some extra cash to buy a boat, this was the perfect way.  I realized after the session that I need to remember about the werewolf.  If they ever come back to the city, maybe the werewolf has infested the poorer district with more, become a MUCH larger problem.

CUE The Tavern.  The Barbarian realizes he won't get much more out of reginald so he heads off to the tavern.  Where he pretends to drink.  There are a few souls in the tavern, A pretentious elf, a old sailor named Ramses, and a tough looking fighter.

One of the players attempts to seduce the elf by giving him a lap dance.  He gets upset quickly, claiming that "You people stink! Have you ever heard of bathing, you smell like horse and bad choices!".  A bar fight ensues.  With one roll the Elf is laid out, however he manages to stick a broken wine glass into the eye of the bartender.

As the dust settles the old man Ramses does a slow clap, and then thanks the PCs for getting rid of that nuisance.

The players learn that the old man is a sailor, and possibly a former pirate.  He knows where they can get a boat, and for not too bad of a price.  The decision is made to meet up in the morning to take care of the details.  Ramses asks to come along.

*Ramses may or may not become a turncoat, time will tell.

And that was the end of the evening.  My nephew and his girlfriend brought there little one over, and she was getting a wee bit pooped out, so we called it.  (well she did haha).  What was really nice about the session was, it was 90% role playing.  There wasn't a lot of starring at a character sheet.  A nice change from the 5e games I had played in the last few years.

This is really the kind of game I want to run.  Obviously there will be fights, etc, however the more roleplaying the better.   Using whitebox really trimmed down how much I was worrying about mechanically wise.  I must admit, the players really got into their characters, including our buddy who is quite the introvert.  He played up the barbarian as if he'd actually been Conan!  Super fun.

Can't wait for the next one.  I prepped quite a lot of the game, and was originally a bit worried that I might run out of stuff.  Turns out I was wrong, players tend to throw a monkey wrench into anything.  So it's good to think on your feet.   Next session will be the voyage and probably meeting the Tanorans.  I do intend to have them get to the island at the north west side, and the point out the village.   At that point it will be up to them as to whether they want to land at the village, cruise around the island, or land somewhere on the island.  Whatever the case, they will be quite short on rations by the time they get there.

Posted by shanepatrickward at 8:47 AM