I'm a little bit ahead, but that's fine.  What I've been fighting is the endless tweaking that my head wants to do.  I was telling Ray Otus the cool thing about this challenge is for the most part it makes me stay on task, and helps with my a.d.d.  Week 1 do this, don't do anything else etc.

Anyways, here's a picture of the hex map for the world.  I've been considering the following:

1.)  Keeping this as a test and trying again.
2.)  Colouring it with crayons
3.)  Scanning it first then possibly colouring in gimp. 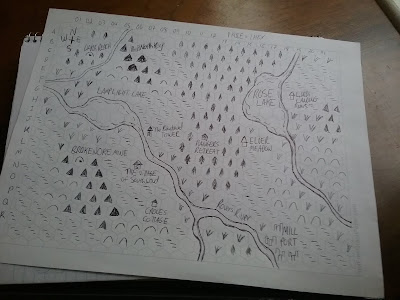 What I've really been trying to do is go with my gut on this challenge and complete it!


Last night I started thinking about character classes (which maybe a whole in depth blog post).  Even though in the original challenge it stats that you should really have the system in mind before starting the challenge.

What I've slightly come up with is the following:

Instead of race as a class, each race will get some benefits (+ on ability scores, see in the dark).   The actual classes will be Ranger (with access to magic), druid (with access to cleric spells), Warlocks/Witches (magic), Knights (Cleric spells),  Rangers will get the thief skills, and druids and knights will be able to turn undead.  This of course is just a thought at this point.  The other thing I'd like to do is to have a basic table that everyone rolls on when they create their character.  They get one magical ability that they can use once a day for 1d6 rounds.  examples include:  Levitation, Force Push/Pull, Camouflage, Shield +2 AC.  I may borrow a few ideas from https://zenopusarchives.blogspot.com/2020/04/holmes-ref-rolling-up-adventurer.html Specifically the swanson abilities.

I've yet to decide if I'm going to run b/x or whitebox FMAG.  I will probably mine the crap out of this post:  https://smolderingwizard.com/2019/10/04/forgotten-gems-of-the-osr-white-box-heroes/

That's what I got so far.  Probably do a bit of re-writing on the encounter tables this evening.  Tomorrow I'll scan the map and tinker.

damn this is fun!