After our starter set 5e adventure wraps up, I am hoping that another player of mine will be DMing a new campaign, after that I want to run some Mutant Future!  Having a brief discussion I decided that it will probably be a hack version of MF rather than the original rules.

Whilst doing a bit of research I caught this, which might be the ticket. 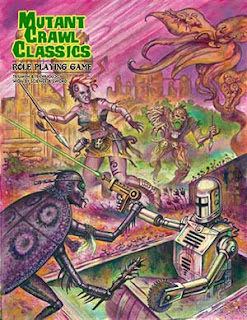 So hopefully there will be a bit of a quick start rules that comes out, more for curiosity than because I'm cheap.  I hope they add the funnel.  That said the price isn't too bad.

As far as a Mutant Future hack, here's a few ideas I have.

*  Since levelling is fairly straight forward in MF, I think I'll just add a system of +1's depending on what level the PC's are.  (Much like the way basicfantasy.org does it for fighters).
*  In mutant future there are mind attacks as well as regular melee attacks.  Wotc just realased a 5e hack for Psionics , which might be something that could be incorporated.  https://dnd.wizards.com/articles/features/awakened-mystic

*  Create a funnel thing for it.

Posted by shanepatrickward at 7:00 AM