I've done this before and I actually quite like doing it.  It add's a bit of mystique to the game, and also immerses the player's within the story.  The other part of this is that it sets the stage to remind me who the major players are within the campaign, as far as the political leaders are concerned, etc.

Here's a copy of the text only.


SAD NEWS “SHIELDS OF ATREU” FOUND DEAD.
Head Marshall Penac has received news that the beloved shields of atreu have been found dead in a cavern north of Brymassen.  A group of Hero’s who recently came to Brymassen set off to find news of the ill-fated group.  A member of the group “biohazz” says “We found one of their shields!  And a very deceased looking adventurer, it’s quite sad”.  Another member of the group is not entirely pleased about the results, but is happy that the group is taking over the cottage that had until recently belonged to the shields of atreu.

ARNOF TO SET OFF ON TRADE MISSION TO ELERD’S KEEP.
The Burgomeister of Brymassen has received news that Arnoff Trading is setting off to Elerd’s keep with a load of Salted winter fish, barrels of ale.  The town council is pleased that they will receive some payment for these items from Lord Elerd.  “We need to keep our economy going, in these hard times” says the Burgomeister.  He goes on to say that a few halfing families are moving to the lands surrounding Elerd’s keep.  Arnoff is seeking a few guards for the incredibly difficult trip.

BARBARIANS SPOTTED IN THE WESTERN HILLS
A recent song sung by the travelling bard “Llywelyn The Out Of Tune” has caused a bit of an uproar.  Apparently the Elf sang of Barbarian’s ravaging the lands to the west!  Halflings flew from the tavern and batten down the hatches for days.  Llywelyn is no longer welcome within the town borders.

NORTHERN SWAMPS ARE A SCARY PLACE!
Podo Brockhouse claims that he saw a 3 headed beast in the swamp.  “I was out hunting near the ocean, I saw the beast and ran as fast as my feet could carry me!”

PIRATES ATTACK A TRAVELLING MERCHANT
Word has come that “our ladies grace” was sunk off the blood coast.  The town councilor’s expected the ship weeks ago.  Rumours have circulated that Pirates are to blame!

THE ELVES OF AUTUMNSHADE WOOD DO NOT APPRECIATE VISITORS.
It has been long known that the Elves of Autumnshade wood do not appreciate visitors, they have kept to themselves for many a year.  Just lately King Kendel Krisnorin of the Autumnshade Wood Elves has decreed that no halflings from Brymassen are allowed within the borders of Autumnshade.  The council asks that all town’s folk abide by these rules.  A plan to send an emissary in the spring is being discussed.  In the meantime the council has meet with the Dwarves of Ebonshield, and it went quite well!  Grizela Stonefist (leader of the Stonefist clan) has proposed to trade food for steel & gems. 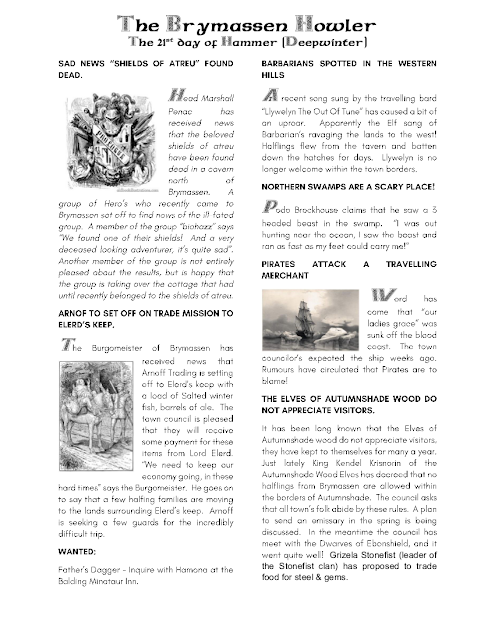 Posted by shanepatrickward at 8:49 AM