*this may contain spoilers about Curse of Strahd.

Pretty sure we drank 6 litres of mountain dew and a 26 of Gin, which goes reasonably well with mountain dew by the way.  So we got to Adam's place mildly late, but not super late.  I had all intentions of prepping my wifes character before we left, but ran out of time.  The good news was that Kurt also had to roll up his character so we had some time.  Our DM Josh showed up and then promptly realized that he forgot a important prop at home.  Which gave us some time to finish up building characters.  I rolled up one more character for the envitable death that will happen.  I'm currently playing a barbaric cleric.  Rolled up a elf wizard as back up.

After our characters were basically done, but before our DM left to run home, he told us that we all got to pick 4 common and 2 uncommon magical items.

*Someone needs to make a handy table/chart listing weapons in rarity.  Tis a mild pain in the arse to go searching thru the dmg looking for raritys.  "woo this is neat... shit legendary".

We get ourselves going on the adventure, by first discussing were exactly we are from.  Our DM asks us each to roll a 6 sided dice, and counter clock wise from ourselves to the result of the dice.  At which point we needed to use our bonds/flaws and ideals to make one positive suggestion about our background regarding the other player.  Super neat idea!!  The dice had a skull on the one, if that had came up we would have had to make one negative comment.

My character has an issue with fidgeting and breaking things.  I rolled that I had to talk about Adam our gnomish wizard illusion expert.  I said that I had been toying with his spellbook and managed to rip out a page by accident.

We all met at a tavern near luskan, my cleric has learned a lot of the smaller races over the years and has come to respect there stalwartness.

The thief & the fighter (both dwarves) were gambling and the thief was using a loaded deck to win at the game.  The gnome came in met us, and scolded us for being gambler's I believe.

Since then we've adventured on and off together.  Honesty to the gods, I love how these stories come about!  all from a simple die roll.   And a brief look at a map.

I should note that I am quite happy to no longer be in Faerun.

So we start the adventure by going down an old road, it gets foggy out, then really foggy and then its incredibly foggy.  You get the picture its foggy!

We all hear something, and our thief sneaks up to get a closer look,  she see's a tall man fighting some wolves.

We decide to bum rush the fight.  The whole time I'm thinking, who's the good guys in this fight? the tall man or the wolves.  At one point I had the DM flip a coin for me to help make my decision.  I was almost swayed to help the wolves, prior to the coin flip. 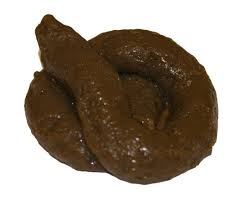 My Cleric's holy symbol is a peice of petrfied mammoth dung.  I grabbed one of those fake dog poops, and pulled it out of my dice bag as soon as I cast my first spell.  Everyone looked at me like i was crazy.  But hey I got some laughs!

The fight ensued, I managed to help out the tall man by casting a few healing spells, and I also talked one of the wolves into being nice to me.  Well, I cast animal friendship and speak to animals.  one of the wolves came and leaned against me and got a good pat down, the other wolve I asked "what the problem is?"  and he said "because, we have to!".

Which of course got me thinking.  I'm already digging ravenloft, just because there's a bit of intrigue there, and backstory.  While I love hack and slash sometimes it can become a bit tedious.

The thief at one point used a bag of tricks and pulled out a white tiger, who got to fight with the wolves.  That was quite fun to role play!

Alright, fights over.  We go off searching for "tall man" as he disappeared into the murk, we followed his tracks but were unable to find him.  We do however see some lights off in the distance, so we make our way their sneakily.

As the other PC's are walking towards the light, I see a small pool of water, and decide that I smell incredibly horrible and I'd like to go for a swim.  (don't split the party!).  Whatever I buggered off.

The other PC's roll into town, hear a few rumours about Strahd, and how long he's been around etc.  We all have a bowl of stew, my character grabs the pot to serve himself, and since he's a major klutz, he spills it all over himself and breaks the handle.  Got inspiration for that one! LMFAO. 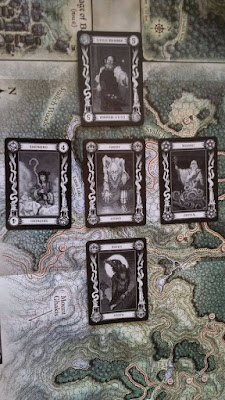 We are directed to a tent with an old woman seer lady, who hasn't shaved her chin in years.  She pulls out a deck of cards (this is what the DM went home to get, he grabbed the tarraoka deck for this specific scene! I would have went home as well).

She deals out 5 cards and describes a bunch of information to us.

I wrote that down, and I will attempt to re-write it a bit later.

And that my friends is the end of session one.  Giver take 4 hours or so. A metric ton of mountain dew (and some gin), cheezies and mangoe habanero wings.  BTW they are friggin amazing!  M&M Meat shops if you have one close to you.  super yummy.

I should start doing some more writing for my next old school session, but a nap feels like a better idea.

Today was thoughly enjoyable, it is interesting what you learn playing with different DM's, I've learned a lot from Adam & Josh.  Super fun.

I do however need to be a bit less meta, I think that's a bit of a DM issue sometimes.

Whilst searching for a fake dog poop image, I found this youtube video on how to actually make it.  Weird.


Posted by shanepatrickward at 4:50 PM