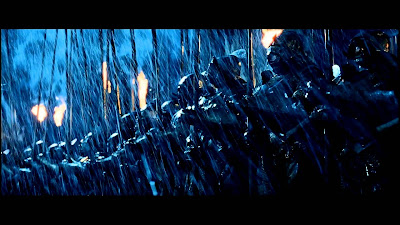 I have been slowly concocting ideas for the "Great Battle" in the campaign I started.  I haven't quite decided if it will be a series of battles, like in Lord of the rings, or one great one at this point.  The plan is to really push the intrigue till the point that everything is ringing.

Mechanically I have a few ideas.  First and foremost, I will hand each player their own group of warriors within the battle on a piece of paper.  Each player will have 4 minis on the board.  The mini's will represent either 12 or 24 units within the battle.

As far as Armour class goes, I think I will set it up so its fairly even across the board, probably everything will be treated as level 1 for ease of combat, with no extra added bonuses.

On the sheet, I'll have the handy boxes used for HP's in basicfantasy adventures.  All damage will be d6 based, which will reduce the units with each troupe the players are handling.  If the player or monsters roll under the armour class, I decided to still allow troop damage, but what will happen is it will be 1d3 rather than 1d6.  Because in a battle people still die.  That being said if the player/monsters roll a 1, they will be over run, take regular damage and won't be able to do anything the next round.  On a roll of 20, it will be double damage, 2d6.

While the battle is taking place, I want to every 4 rounds or so, cut to the player's perspective.  So regular D&D type combat.  Then back to the battle at hand.

I plan to use a board from dragonstrike as the battle mat.  Probably the forest one.  As far as movement I think d4s.  What I haven't quite decided if there's going to be an objective other than complete destruction.  Like a tower or something the PC"s are protecting.  Or vice verse, storming the keep!  hmmm... actually that might just work. 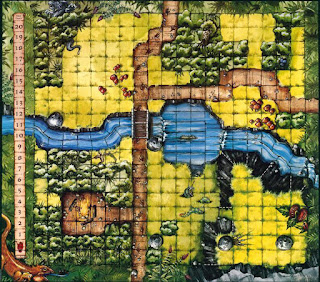 As far as the lead up to the battle, I have a few ideas that I'm kicking around but nothing concrete yet.

This is what I've got so far.


Posted by shanepatrickward at 7:02 AM