Training to level up - Warriors 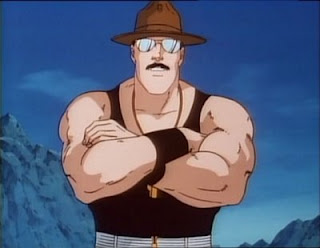 What crossed my mind, was for the fighter trainer, to have a guy like Sgt. Slaughter.  I am unsure as to whether you may have seen the GI JOE movie.  During the movie, the JOES have to go find Slaughter for training and for plot development.  He's obviously a hard ass, part of the quest is just finding the guy.  He lives I believe in the Mountains of Burma, or something like that.

Now just think about D&D and a Medieval world, Slaughter fits right in doesn't he?

Just checked wikipedia - Fictionalized versions of Sgt. Slaughter were part of the G.I. Joe: A Real American Hero toyline, cartoon and comic books, as a member of the G.I. Joe team and first appeared in the five-part TV episode entitled "Arise, Serpentor, Arise!

Here's the scene from when the JOE's meet Slaughter for the first time.

From the scene you realize that Slaughter has his own crack team of "Slaughter's Renegades", basically some hard core guys who are currently going thru a training regime with the Good Sergeant.

As far as D&D is concerned, first off role playing a drill Sergeant is going to epic-ally funny! Secondly he can be a old warrior living in the mountains training recruits who come along.  Still in super good shape, wrestles dragons for fun etc.  Obviously the PC's will have to go and find him first.  Should make for an interesting adventure I figure.

Now to come up with a name for this heroic trainer?

Posted by shanepatrickward at 9:36 AM