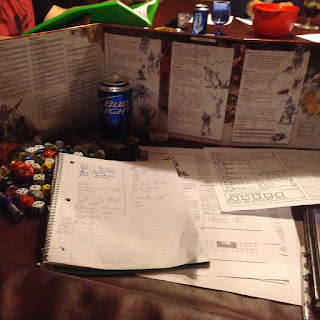 The thing I love about old school modules, and specifically the basic fantasy modules, is that you can pick them up and run them without really having read the whole adventure.  I did however skim thru a bit of the adventure anthology and "Beneath Brymassen" grabbed me as the perfect adventure for a first time game.

So I got the call the other day saying "Hey it's my friends birthday and he wants to play some D&D".  Woot!  Thankfully I had prepped and printed BB and a few sexy dyson logo's character sheets.  Grabbed those and my copy of basic fantasy and we are off.

Once we got everyone at the table, we went thru character generation, honestly I love the fact that it takes all of 10 minutes to roll up a character.  I do have to remember to print the "player's book" for basic fantasy, as it would make life a bit easier rolling up characters.  We had the one book and were passing it around.  As well, I like the idea of incorporating the equipment packs, just for ease of "let's get going".

In my head brymassen is either somewhere in the known world, or a world of my own devising.  I haven't quite decided.  As I stated in a previous blog, I kind of like the idea of drawing the map of the world as I go.  What I am going to have to do is preplan a little background, like where are the PC's from etc. 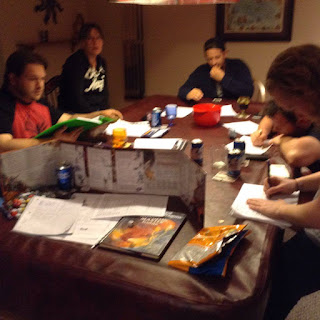 First things first I asked the players, where did the characters all meet.  Since there were 3 elves, it was decided that they went off adventuring together.  At some point they were in a tavern and a fight broke out.  The other 2 characters (dwarf and a human hippy cleric) helped the elves.  And hence forth they have been adventuring.

It is winter in the small hobbit fishing village of Brymassen, and the character's are hanging out in the "herald's inn", enjoying some Winter ale.  All of a sudden the front door opens and a dishevelled hobbit walks in.  "Hey my children have been kidnapped! by weird dog like humans!"  His name is Rolof the weaver.

The PC's quickly decide that they will help the poor hobbit out.  Thank Odin! Since if they decided against it, we would have been playing cards against humanity.

The PC's follow Rolof back to his small dwelling and go thru a hole in the basement into the dungeon. First things first I have all the PC's roll 1d6 as they wander aimlessly thru the first room.  All  of them roll above a 1 or 2, except one player.  He steps on a plate in teh floor and a spear comes flying at his head.  Save vs death ray or suffer the consequences of having a spear stuck in your head.

Alright onto the dungeon.  The players meet up with a wizened old hobgoblin who tells them after a bit of convincing that there are kobolds in the dungeon.  Funny thing was the hobgoblin wanted some money for the information, however one of the players wanted to do a "swagger check".  "I walk  up like Matthew Mcconaughey".  He rolled a 20.  The hobgoblin paid them for the information! hahahaha. Good enough.

Red Herring room with weird things written on the walls (room 7).  After a bit of discussion the PC's decided to go North.  (I moved the map so north was facing up, in the original map North is to the left,it screwed with my head).  They walk into a room with a bunch of kobolds.  A fight breaks out!  They manage to take a bit of damage, but are otherwise fine by the end of it.

I decided to steal the 5e death throw saving mechanic for this game.  Since they were all 1st level meat. 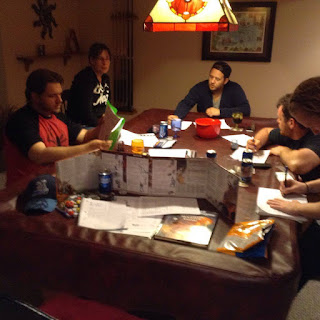 The PC's check out the room find some loot and move into a very small storage room.  The thief walks in and gets covered in slime.

He fails a saving throw, and is slowly becoming slime.  The other hero's beat the crap out of the slime and there's bits and pieces of it all over the walls.  I tell them that the thief can no longer feel his arms.  The player starts swinging his arms around like there are no bones left in his forearms.  So funny! After a bit of discussion the PC's decide to go to a small church of Odin and see if they can't get the thief healed.  The cleric hippy decided to use cure light wounds, but it didn't help him much.

The nice priest took a reasonable amount of silver pieces to heal the thief up.  I decided that the thief would suffer a bit from the slime and had him re-roll his constitution and keep the result.  His roll was lower than his current score.  hahah.

While in town the PC's notice a wagon out front of the Inn, it is "Arnof's Trading Co", the PC's divest themselves of a few clubs and slings, and buy a weirdly coloured potion for a crazy amount of gold pieces.

Back to the dungeon.  The pc's notice a small glowing light at the end of one tunnel, they disregard it and go back towards the red herring room with crap painted on all of the doors.

The entire adventure the PC's were midly concerned about mimics, so pretty much every door, they either poked or said "hello?".   Role playing a door was funny.  "Alright you hit the door with the end of your spear, there's a loud thunk".  At some point I'll throw in a mimic type creature, when they are least expecting it.

The Hero's step into a room filled with bones (I was super excited about the treasure in this room).  They decided after a bit of deliberation that this room freaked them out, and was to be known from this point forward as "fuck that room".  Which was promptly written on the map.

The PC's made there way back to the glowing lights room.  The thief snuck up and realized that it was in fact orc's and they were trying to pry some glowing skulls out of the walls.  A previous attempt to sneak was foiled by a 1, and the thief tripped and fell into a room filled with kobolds (room 8).

The thief reports back.  The 2 warriors decide to sit a bit lower that the other pc's with their spears held high.  Hoping that if the Orcs were to bum rush them they would get speared.  the thief decides to get the orcs attention by yelling "WHAT HO!".  Cue fight.

The orc's are smart enough to realize the trap being set and start firing arrows at the PC's.  A magic missile flings by and hits one of the orcs.

Big kuffle, all the orcs are dead save one.  I roll a morale check and he drops his weapon.

The thief decides to attempt to grapple the last remaining orc, in order to get some information out of him.  We roll a contest, and he rolls a 1.  I decide that the orc has essentially flipped him over into a position that mostly dogs do.

One of the other PC's strongarm's the Orc, and they question him.  He tells them that he heard cries for help from the north section of the dungeon, but other than that they are oblivious to much that was going on.  They are a scouting party from a larger tribe.  (note for next adventure possibly). 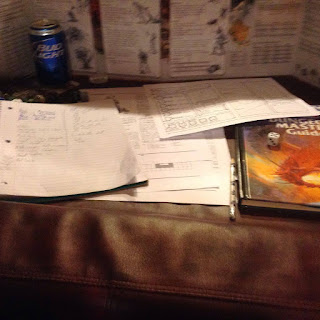 One quick dagger slip from the wizard an the Orc goes down.  The PC's turn their attention to the skulls embedded in the walls.  They decide in their infinite wisdom (of which they have little), that they will attempt to smash the skulls out of the walls.  I had each player roll a ability check (strength) with a really high target number.  All of them smashed the skull instead of hitting the wall.  There is now only 1 glowing skull left after they have demolished the other 3.  I have the thief roll a wisdom check, he rolls successfully and I mention to him that as he is walking out of the room, he hears a jingle in his pocket and is reminded that he has lock picks.   The A-HA moment.  The thief walks back into the room and attempts to pick the lock, and remove the skull.  He is unsuccessful and decides to leave the skull where it lies.

We continue on.  One of the PC's notice a crack of light coming from a wall.  Same thing I have all the PC's roll a d6, and one of them notices something odd.  I'm not a fan of secret doors in tunnels.  Especially if they are plot related.  This of course is not.  The PC's walk into a tomb.  There are 4 skeletons.  A fight ensues.  One of the warriors is bashing skulls literally with a war hammer.  The hippy cleric dies in a blaze of glory.  RIP Hippy Cleric.  After the fight the PC's clear the room out, find some much needed magical items and settle themselves down for a much needed rest.  While sleeping a knock appears at the door of the tomb.  It's a small halfing with a sword  (peon).  She's from the town and decided to come and help.

While the PC's were deciding on the treasure I rolled up a peon character for my wife, who was playing the hippy cleric.  Once again I love that i can roll up a character in 5 mins.

The PC's finally make their way to the room that kids are being held in.  They listen at the door, realize that its the kobolds.  They bust into the room and kill off the kobolds.  The thief attempts to toss the dwarf who in turn is going to attempt a backflip crazy axe maneuver.  It fails miserably.  However I hand out XP for silly shit like that.

Down to the final boss, I have a few half dead PC's, but we are successful.  The kids are returned safely to their happy parents.  Just before the kobold boss died, he is questioned about the rest of the dungeon.  He explains to them that the rest of dungeon holds traps that have been strategically placed.  (ie the DM is tired).

all told about 3 hours to get thru the dungeon.  It was a crazy amount of fun! I am going to sit down and write out a few hexes and side adventures for the lands surrounding Brymassen.  Which will then become "Beyond Brymassen".

EDIT:  Yes I was drinking bud light.  You can throw your insults as you wish.


Posted by shanepatrickward at 9:51 AM