Yesterday our 5e group reconvened in Barovia.  Twas quite funny.  The morning after speaking with Madame Ava, we got up stretched had a bit to eat and then started talking to the locals.  Whilst gathering some information we found out that the Village of Barovia wasn't too far.  We made the decision to go off and see what we could find there.  (a bit meta) I figured that it would be a good place to start.

All of the players other than me had basically forgotten all of their notes, specifically the premonitions from Ava.  Thankfully I could slighlty make out some of my notes.  (note I'll start taking notes on my tablet during play so I can actually read it!).

As we were walking to Barovia we saw a strange sight!  I skeleton riding a Skeletal horse.  Weirdness.  It passed us as we did the ye old hobbit hide behind a tree schitck.  We decided much to the chagrin of my wife that we would follow the skeleton.

A few hours passed and we stumbled up on this rather large bridge.  On the bridge were a few gargoyles.  The bridge looked mildly rickety, so my silly barbarian cleric decided to run across it.  Successful athletics check!  (My rolling was sub par at best yesterday, those darn wiz dice were not my friends).  The illusionist decided to turn himself into a skeleton as well and follow the skeleton across the bridge.  Thankfully nothing weird happened.  But we were all concerned about the gargoyles.

We noticed that the bridge spanned a waterfall, to which I had a premonition about a vampire and a mage duelling it out here.

We decided against really doing to much exploring around the bridge.  I have no idea why, but the DM was looking at us like "seriously?" lol.   We did however notice that a raven was sitting and watching us.  I cast "speak with animals" and had a very entertaining conversation with the Raven (which i kept calling a crow for some reason).

Note: It is always fun when something like this happens, it gave me some fuel for the next time I"m gming and a player wants to speak to an animal.

The raven gave us some useful information, and appeared to be following us to see what we were up to.  Our GM kept sticking his nose in his armpit like he was fluffing his feathers. so awesome!

Anyways, we decide to make a bee line back to the village of Barovia, as we stand in the shadows of a road leading to a castle.  At one point my wife's character was like, why don't we go off to that castle??  to which META we were all like NOPE we will probably die!

I am guessing she was a bit frustrated as far as where we were going next, since we were a bit A.D.D. about what we were doing.

A bunch of wolves & direwolves caught us by surprise on the road back to the village.

Rather than being in the background my Cleric decided to charge into the fray and was casting offensive spells left and right.  To which I got my butt seriously kicked! 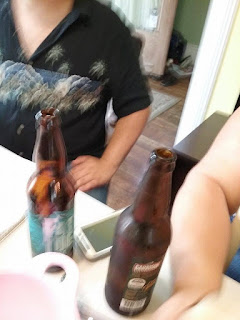 Lying prone on the ground, the other players managed to take out the rest of the wolves, while I was making death saving throws.  As I stated earlier my dice were not rolling the best, and for the save's I grabbed my friend Adam's big d20s!  Which I should have started with in all likely hood.

And that is where we ended for the day.  We went off to a awesome taco joint and i had a giant burrito and a jartos (mmmmm Mexican soda pop!)

And to top off the fun day, my buddy Adam bought me the 5e PHB for my birthday.

So I'm guessing I'll be making some characters for the rest of the day!  I find that the easiest way for me to learn a new system is to create characters.  So first up a dragon born sorcerer, and then a bunch of other weirdo combinations.

Oh and here's a epic table that could be used for Strahd, or maybe something else. http://draconicmagazine.com/articles/random-table-1

Posted by shanepatrickward at 8:09 AM