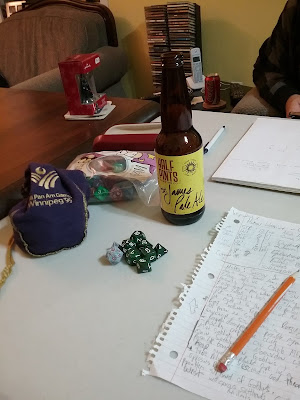 I believe the world is called "Morganvain", however I'm not entirely sure.  I have a pile of the notes from the last two sessions, however the DM took the sheet home so I'll have to do a scan at some point and type the whole thing out.

We left off with a few possible missions:

1.  The crazy atheist tribesman to the south west of the major city have been causing much havoc.  We were tasked with going out and killing them basically #murderhobo for life.  We were told we would get 1 gp per scalp.

2.  A bunch of bad goblins that we were also supposed to take care.

3.  Find out who destroyed, lit fire to the town of FOB (Fresh Off The Boat).  The reason the town is so named that is because that is where we started this adventure and the DM didn't have a name for the town.  Considering that was exactly what we were, it sort of stuck.

We decided to leave the big city and make our way back to FOB in hopes of finding the buggers that set FOB on fire.

Whilst out and about we found a small little village.  In the centre of town was a temple of Zeus, and 6 pillars with people tied to them.  We found out that all of them had done some bad things, which is why they were tied to the poles.

1 guy killed his grandmother with an axe, apparently a fairly shiney silver axe.  For the rest of the evening we called him "Mr. Kill your grandmother with an axe guy".  Another dude had stolen a woman and made off with her, but was later caught.  And the third most interesting character offered us 2000 GPs to get him down.  His story was that he was working in his fields (he was a farmer) and he found 3 people suffering some serious wounds.  One of which (the most injured) he tried to help by putting his intestines back into him.  Without any luck.

"you wouldn't believe how much intestines there are!"

The farmer took the other 2 wounded into his house and attempted to care for them.  A army regiment showed up and caught the farmer helping these guys and was outed as a rebel sympathizer.  Basically wrong place wrong time.

We found out that the acolytes of Zeus, basically tie these people up and everyone lunch they bring out bags for the prisoners to open.  There are supposed to be 2 rocks in each bag, one marked death, one marked life.

If you pull death you get stuck up on the pole for another day, the hope is that you will get struck by lighting commanded by Zeus.

After some crazy discussions on how to possibly help this guy out, we decided that it might be best to scope out the temple, and these bags.  See if there's any possibility that the bags contain two death stones.

Interesting enough this is an actual old myth I believe.

Our thief scouted the temple but was unable to find any information out.

A day passes, and we are standing in the square when one guy dies from a lighting strike. The priest come out to do the last rites etc, bring crowd gathers.  NOW IS OUR CHANCE!

We all go into the temple and setup an ambush.  Beat up one guard, and one of the players dawns his clothes in hopes of fooling the priests.  Priests come back in, fight ensues, we beat them up.

We killed off 3 of them.  Our player who dawned the robes decides to play the part of a priest by standing in front of the altar, while the rest of us go off into the basement looking for trinkets and shiney things.

Yes we split the party.

I get downstairs leading the party, open a door and find out that we just walked into a room filled with more acolytes.

I yell "RUN AWAY!"  However the DM had me roll to see if I yelled loud enough for the PC upstairs to hear.  Turns out nope.

I then cue up Bon Jovi.

Somehow we managed to beat up a few of them, 2 players almost died (making 5e death saving throws), the thief player who was upstairs heard us and tossed some oil the stairs and attempted to lit it.

Which didn't quite work out.

Finally one of the other players used his long sword and a golden chalice to create a spark.  Since none of us thought to buy an actual tinderbox.

and now we have acolytes in flames.

We all make a beeline out of town, after helping down Mr. 2000 GPs.

I should mention that one of the players has a outrageously terrible eastern European accent!  We were dealing with some Acolytes of Zeus, and he kept calling them "Deuce worshipers"


Posted by shanepatrickward at 7:23 AM