Mutant Future - Session 2 - "Did you say cats or caps?

"Did you say cats or caps? because I don't want to be paid in cats!  This is how pretty much every single negotiation went last night.  2 of the characters are deaf.  At some point I think I will pay them in cats, just for the sake of a laugh.

The characters started off in the small village of IMLI.  The players decided that they would make the delivery to the Whiz.  They did not however know exactly where the Whiz's place was located.  After a brief discussion with Newman (the pawn shop owner) they headed to the local watering hole for a much needed drink.

As it was still a bit early and they are to meet newman later into the evening.  At the tavern they met a nice fellow with rather large toes (just two of them), he told them that he was a furrier and that he would be reasonable money for furs.  Specifically Raboxxen fur!  He then went on to explain exactly what a raboxxen was (to the horror of the players!).  They players had murdered a few giant ferrets and decided to sell them off to the furrier.  Except one, which the android cut the head off and put on his head as a hat.  (I think he's chaotic, if he isn't he know is).

The bartender Bob (a mutated brown bear) was asked about the surrounding area, specifically the lake.  He told them that he doesn't oft go to the lake, but he knows there's ruins along the west side.  The entire lake is frozen.

At which point one of the players gave him the "International symbol for peace", and replied with "Peace be with you". (I'm guessing this is going to be the "safe travels" in the game.)  Below is the international symbol. 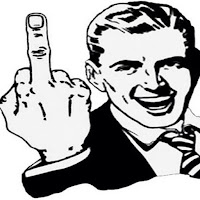 Prior to leaving the bar the players noticed one of the MPs having a drink and then leaving before them.  It was about the time to leave and find newman, so the players wandered outside of the gate.  I had originally intended to have the MPs shake them down about where they were going, and then I thought about NPC knowledge vs gamesmaster knowledge.  The PCs started out towards the edges of the forest, where they were supposed to meet Newman late at night.  As they were walking they here a "HEY!" in the distance behind them.  It's one of the MPs and rides up to them to ask them what they are doing (and not in a shakedown kind of way).  The PCs tell him that they are on a hunting trip, however one of the PCs slips up and says "we are going to meet the whiz", which is what I was kind of hoping for.

I decided to have the player roll me a charisma check, on a fail the MP would have overheard the part about whiz.

*note the MPs are tech whores, and the Whiz is a tech hoarder.

The conversation goes along, and the mp wants to go hunting with the PCs, of course this won't work as they are not going hunting.  The MP challenged the PCs to a contest to see who could out hunt who.  3 days time they are supposed to meet in IMLI with their kills (Raboxxen).  They split up and the PCs make their way to the edge of the forest.  They meet Newman, and he gives them the tech.  It's a large duffel bag made of metal, with a keycode on it.  The PCs will be unable to get into it.

Newman tells them the general whereabouts of the Whiz's location, and then buggers off back to town under cover of night fall.

The PCs decide to travel thru the night as well.  They hear screams off in the distance, and investigate.  They find 2 children tied to a tree, surrounding the tree are Chicken Wolves (who look very hungry).  The PCs fight off most of the chicken wolves (they failed a morale check and left for easier prey).  The children are cut down, and the players here there story.

They come from a village not far away, they were to be sacrificed to the Light God.  They were found to be non-radiated and not welcomed among their people.

The player's decide to help them, or at the very least keep them.  The players are aware of the Pure Alliance and think they can get a tidy payoff by selling the children, bunch of evil bastards.

Its at this point the players have to roll for rad poisoning, as they have unknowingly been in the middle of a radiation zone.

The next day they stumble onto a small town, with a post office and a mine and not a helluva lot else.  The players go to check out the door to the post office, and joke around (out of character) about Mimics.  I tell them the door is locked, and they ask the door specifically if its a mimic.  I decide you know what? fuck it, its a mimic!  Battle ensues!

When the mimic is killed, its banished back to a fantasy world with a pair of old work boots that were sitting out front of the post office.  (Reminder to add this to a fantasy campaign at some point!).

There's not a helluva a lot in the post office, but the players find a map to a few points of interest including a rangers station, and RCMP station and a Spa called "Lakewood Spa & Country Club".

They decide to sleep thru the night at the post office, and get going around mid day.

The next morning they decide to make their way towards the Spa.  Eventually they find it, although its a very weird situation.  Everyone is asked to save vs radiation (save vs spell?).  Some of the players can see a nice lake, greenery, a little river trickling in the distances.  The players who were successful noticed a weird flickering in the image.  A player who failed his save moves forward and bangs his head right into the steel wall.   At this point a disembodied voice says "thank you for your patience, the Whiz is out at this time, please leave a message at the beep!".

From behind some old trees steps a robot named Nucleus, who proceeds to pay the players for bringing the tech.  As well he tells them of a lab near the "giant crater" and an old military base that might be worth checking out.

And so ends session 2.  We covered a LOT of ground.


Posted by shanepatrickward at 7:59 AM