Delve into the "Pyramid Of The Lost King" 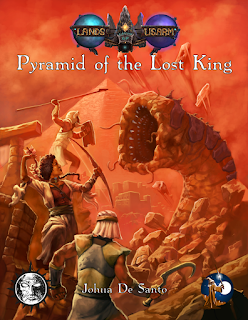 I'm ecstatic that this has been released to the public at large!  Somehow I managed to wing myself into adding a table to this project and getting my name in the credits (this seems to be a Modus Operandi of mine).  When I first found G+ and the OSR community, one of the first people I talked with was +Johua De Santo and +Frank Turfler (super nice dudes! super supportive!).  We have this interesting friendship that has swirled around helping each other, discussing RPGs, our current products.  It's really nice to have people to bounce ideas off of.

I totally understand the process of creating something as expansive as POTLK, I've tried personally, and I've failed miserably.  It's not easy.  Taking a nugget of an idea and bringing it to fruition is one of the most difficult things to do.  The longer it takes, the more the end of the road seems so far off.  As a "writer" (I honestly shouldn't claim to be) I get it, you are always thinking about it, in some cases maybe you are loosing sleep over it.  Finally when its done and you birth this thing and give it out to the public and go "here! enjoy!" there is a sense of wonderment, amazement, nervousness and anxiety because you have no idea how its going to come across.  While we may not put these things out for our own vanity, it plays a bit of a role.  If someone tears you new one because you had a typo, or a inappropriate HD count for a monster you feel terrible.

I honestly can't wait to run this adventure.  I've read it, re-read it, saw it from its initial stages to re-writes, to final completion.  I've got excited over art, tables, reading it I've got ideas floating around in my head on what I want to do with it.

Whenever it's my turn to DM for our 5e group, I think this will be the module to run!  First because I really want to, second because I can mold it to the way i want to run it, and third because I know that the players won't grab a copy and spoil it for themselves (they are big fans of wotc and collect everything, despite my insistence that the DIY OSR scene is fantastic!).

So without further ado, here's the brief write up on the adventure.  The PDF is currently $10. Softcover $15.

You can grab the adventure here.


Millions of year ago the lands of Usarm were devastated by a great Cataclysm in the final days of the war between the Gods of Usa’arm and the demonish threat of the N’zi. In the wake of a final assault by the Usa’arm the very fabric of reality was torn asunder flooding the world with arcane energies and rips that sundered other worlds and realities … and in the process sank Usarm into the dark depths of ruin.

Now, Usarm is home to races and monsters dragged through those rips; refugees who now call a world ravaged by magic home. Wars between some races is common, and a dark threat rises in the North and another in the far south. A south that until now was left unexplored by the peoples of Usarm.

Intrigued by the prospect of riches the Merchants Guilds of Newrk stretch their arms and money into the great southern desert of the Saragubi hoping to find new peoples and new cultures to trade with and to grow more wealthy by.

Pyramid of the Lost King is designed for play with Frog God Games Swords & Wizardry and can be enjoyed by characters of the first to five level and is as much a campaign as it is an adventure. Within this book lay the trade city of Basq, the Rift Bridge, the Saragubi Desert, and hours of adventure for all who are foolhardy enough to venture into the Desert.
Posted by shanepatrickward at 8:19 AM