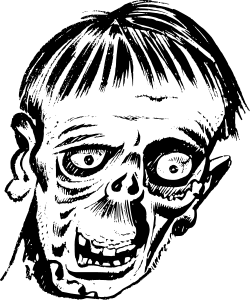 I'm not sure if this happens to you? if it even crosses your mind.  It happens to me all the time.  When I'm writing an adventure I start thinking "Would this work in real life?".

I almost always forget that magic plays a big part in the fantasy world's that we create, and sometimes the best explanation is magic.  Although that maybe a cop out.

As an example, I worry about the structure of a dungeon.  The air, the way the water flows.  Even things like monsters.  Is it even logical to have a group of giant rats, a bunch of orcs, some goblins and a medusa.  How do they all work together in this environment? Does it matter? Well I think it does!  There should be a reason for things, not just a bunch of meat with treasure right?

When I was writing our mutant future campaign (that has kinda went the way of the dinosaur).  I kept  thinking "alright this is sort of based on the real world, so there won't be a bunch of zombie lab testing facilities , because there never were.  In fact there were barely any buildings across the farming landscape".  But I mean, it's mutant future right, so it's supposed to fantasy.  The world blew up, things crawled out the muck".

When we wrote the "Invitation from the blue baron", there wasn't any real rules about poly morphing in Blueholme.  I mean there are rules out there for old school games, but I thought "Alright I need something to change people into monsters, and something that's going to last longer than ex rounds". Screw the rules, this is magic, you drink the potion you become a monster and it's going to last until the PCs figure this shit out.

I guess it's whatever works right? As long as there is a somewhat plausible explanation.  Even if that reason is "magic", just go with it.

I'm not sure if this makes any actual sense, it's Thursday and honestly a bit more coffee would be beneficial.

I hope you have a good weekend rolling some dice!