New adventure in the works 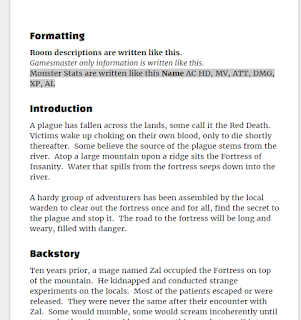 Just started working on a new adventure this week.  I decided to use blueholme, as it's just a wonderful system to write for.  As well I went and mined Dyson's blog for a cool map.  (something that I am probably going to do more often!).

The adventure is inspired by a local metal band that I'm friends with.  I actually talked to them about it and they are super cool with it!  So there will be a little cross promo going on, which is going to be fun.

There is something that I really like about writing adventures for levels 1 -3.  Maybe its because a LOT of games start off that way.  Maybe it's the ease of having less rules, less damage, the very real possibility of character death (that's probably it actually).

I can't honestly wait for the new Blueholme Journeymanne Rules to be in my hands, however from a writers stand point the Prentice rules just turn my crank!

I'll keep you posted on the progress.  Thus far I have 19 rooms.  Now to just come up with a cool name for the series of adventures I have planned (yah I just said it... series.....).  Stay tuned!
Posted by shanepatrickward at 7:33 AM