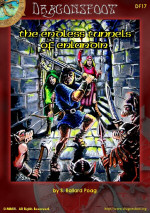 Our group has started a few campaigns here and there, but haven't really finished anything due to time, we tend to get busy over the summer.  Everyone has a busy schedule, campaign play becomes difficult.  Mostly because no one can remember where the heck we were from the last time we played.

I've decided to run a somewhat mega dungeon, well let's say its a decent sized dungeon rather than mega.  I've often waxed about wanting to run "The Endless Tunnels Of Enlandin", but I haven't got around to it yet.

Using the rules of FLAILSNAILS  I'm allowing all characters from previous campaigns in to the new campaign (Including one much beloved dead one... i know... he was a well loved character).

As a chassis to run the game I'm going to use b/x & basic fantasy.  I am going to allow Vaginas are magic though.  (or a hack I build... which maybe the plan).

The idea behind this will allow players to come and go as they please, If I can get everyone around the table fantastic! If I can't cest la vie we play on.  Those characters not at the table will be relegated to the background as npcs for the session.

Here's a couple posts about Enlandin.

Download it here. (except my players DON"T DO THAT!)

The nice thing about the module is that it's been revised for basic old school play, leaving out ACs and most stats.  Just hit points and what time of monster.