Rage of the rakasta idea 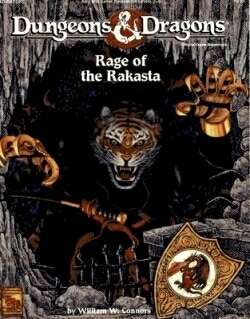 I've posted about the Rakasta before.  They appeal to me.  I don't understand why they've been dropped from the monster manual over the years? Maybe because people get them confused with the Rakshasa?

Whatever the case, while reading Isle of dread I stumbled upon the fact that there's a camp of Rakasta on the island?

What the heck are they doing there?

My first thought was maybe they are in direct competition with the pirates near the island?

Perhaps they recently moved from the main land of Mystara? And have sought out a new life.

Or maybe they are on an expedition similar to the player characters?

Whatever the case maybe, I have a hard copy of "Rage Of The Rakasta" at home that I TOTALLY forgot about!

With a bit of tweaking I'm sure it could work wonderfully on the island.

Here is the blurb from drivethrurpg.com:

Beware the cat-men's fury!
This entry-level module pits a single player character of 2nd to 4th level against samurai cat-men. Rage of the Rakasta is specially designed as a one-on-one for a single DUNGEON MASTER and one player. It can also be played by a DM and a group of players or by a single player without a DM. Rage of the Rakasta takes place in the Thunder Rift game setting. It can be played by itself or as part of a campaign with other modules sharing the same setting: Quest for the Siver Sword, Assault on Raven's Ruins, Sword and Shield, Knight of Newts, and the forthcoming In the Phantom's Wake. The DUNGEONS & DRAGONS Game Box is needed to play this adventure Recommended for a single character, levels 2-4 Can be played with or without a DUNGEON MASTER Includes a large map sheet and twenty stand-up figures Introduces new monsters, new magic items, and a new character class Can be played as a sequel to Quest for the Silver Sword or as a stand-alone adventure.

Honestly the Isle of dread is the perfect campaign system.  You could consider it "mini", but there's so much you can throw in there.  I intend to run Dwellers of the forbidden city, the lost city and a few other modules hopefully.

Another super cool thing about the adventure (rage of the rakasta) is that there are rules for using Rakastas as player characters (which begs me to play b/x!)

+Eric Fabiaschi has written a ton of great posts about Isle Of Dread, if your curious jump on over here:

Posted by shanepatrickward at 10:37 AM

Email ThisBlogThis!Share to TwitterShare to FacebookShare to Pinterest
Labels: Isle Of Dread, rage of the rakasta, swords & stichery