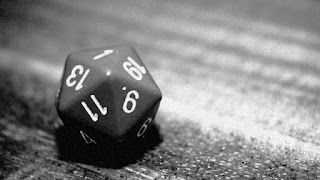 Yesterday I had a brief discussion with someone on fb about fifth edition.  What I came to realize is that there are strange little cultures around games.  Some of them I feel apart of and some of them I don't.  As far as D&D is concerned, I really don't feel part of the culture when it comes to any discussion 3rd edition and up.

I feel like I'm part of the OSR, and the little cultures that exist around specific games I can still be a part of, or at least feel like I am.  Because all of those games come from an original source that I can wrap my brain around.  examples include Lotfp, DCC, Bfrpg.  All of those games have a niche group of people that love them, know the history behind them and play them.  In the end though all those games are based on the D&D that I know (Obviously they all have 3rd edition mechanics).

What I'm really talking about is the WOTC lore.  I only just read Ebberon a year ago.  I still don't quite understand what the hell a war forged is, or a Artificer for that matter.  I know what a tinker gnome is!

I haven't read one entry of unearthed arcanca.  I barely read any 2e splat books, I've only discovered some of the cool 2nd edition worlds in the last year or so.

When I first started running fifth edition (starter set) I was going to use the Forgotten Realms 2e setting (because that is the one I have and the one I"m familiar with).  Of course it's further back in time than the world as it stands in fifth.  There's no tieflings, dragonborn, etc.  There's no spell plague.  Wrapping my head around all that crap is hard, it's like I'm in grade 4 and everyone else is in grade 12.

This whole thing reminds me of this one very strange moment regarding "Magic the gathering".  I only ever played a little bit, with a friend of mine back in the day.  The brown cards.  We used to get together on my days off, sit in a bar and play in the afternoon.  I still don't quite get it.  Anyways, one time I was at a comic con, and in the far corner of the room was a magic table setup.  I'm wandering around checking out booths and games being played and I walk past the magic table.  I'm thinking "you know what I should really consider picking this up again, it was fun at the time".

The two guys running the table started talking to me about "this weird card" and "that weird card" and if you combined the two it could do "this amazing thing".  I'm just standing there like, "dude I played with the brown cards, I never mesmerized them and I have no friggin idea what you are talking about".

So lessons.  I shouldn't get into conversations about things that I don't know much about.  That's like rule number one of the internet.  And lesson two, despite some of the differences between games and communities of the OSR, I really feel like I actually belong.  I'm part of the cool kids.