Valley of the mage

When I got the greyhawk boxed set, one of the first places I looked at was the Duchy Of Geoff.   As I had heard a lot of things have happened there over the years.  Looking at the map, the place that intrigued me the most was "the valley of the mage".

After doing a bit of reasearch I found out that there was a second edition module that detailed the valley, it was called "the vale of the mage".   (I'm wondering if something was lost in transition at some point?)

I did a quick google search and found some highlights regarding the region.

One thing I found interesting in reading the description about the Valley was Gygax's comments regarding it:

The Vale of the Mage was never an important element in Gary Gygax's Greyhawk campaign. As he said, "None of the players ever cared to investigate the Valley of the Mage. It was their decision, and I didn't prevent interaction." However, Gygax did write about the Vale early on, in The World of Greyhawk Fantasy World Setting.


There's only one way to get there - through the Barrier Peaks. Once you're there, you are confronted with armed guards, traps both magical and mechanical, and legendary beasts?not to mention the wandering necromancers.

Why go in there?

Because rulers of neighboring countries have asked you to persuade the Black One to help rout that group of expatriate necromancers. They tried a coup, failed, and came to the Vale of the Mage to hide - and, presumably, to regroup and ally with the Black One. They may have gained the help of the Tree People, as well; you won't know until (perhaps) it'll be too late to turn back.
It's a jungle in there? 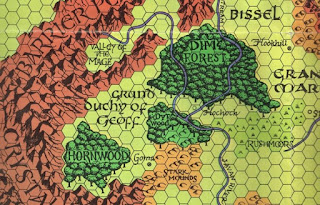 So here's the thing, in considering my greyhawk campaign, I had intended (or hoped the players would eventually wind up in the valley).  The first adventure I was going to run was an idea I got from a random adventure generator.

The players are hired to escort a nobleman (from Gorna) to his new manor he bought!  It is on the edge of the Dim forest near where the mountains meet the forest.  When the players get there they find that the entire place is over run with monsters (or some kind of evil).  Along the way they meet the Elven (Olven) people's of the Dim forest and learn of the rumours of the Valley.  Somewhere in the mansion maybe a few clues to the valley as well.

My intention's with the valley were similar to what the module sounds like, (even though I didn't know that it existed).  I was really basing it off of the information in the boxed set.

Long ago a mighty wizard secluded himself in the lush valley at the headwaters of the Javan River amidst the Barrier Peaks. His servants posted the approaches to the area, warning all alike that entrance to the domain thus established was forbidden except by express invitation from its laird. What has transpired since the valley was claimed many decades ago is simply a matter of conjecture, for no one goes there. (The Grand Duke does not care, and an expedition from Gran March never returned.) There are, of course, tales of bold adventurers returning loaded with platinum and gems which are said to litter stream beds as pebbles do elsewhere, but even these stories are insufficient to cause much interest, as the area is positively known to be inhabited by horrible monsters. What is known for certain is that bodies of troops are sometimes seen near the verges of Dim Forest, and that mysterious groups sometimes journey in the direction of this place.  source

I feel like the idea of using the valley as a sandbox with an overarching threat might be a lot of fun.  Quite possibly the manor house could be a home base per se (or possibly a small elven village on the outskirts of the forest).

I had also intended to have a bit of Barrier Peaks thrown in, and possibly against the giants.  Although not the actual modules per se, just some of the ideas.

Email ThisBlogThis!Share to TwitterShare to FacebookShare to Pinterest
Labels: greyhawk, vale of the mage., valley of the mage