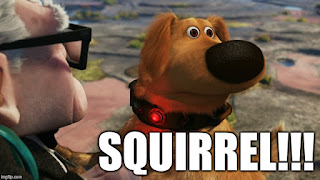 I admit it.  I'm an A.D.D. Gamer.
What does that mean?
Well what it means is OOOOH SHINY!

I've been slowly working on a AFF adventure set in and around Darkwood forest.

THEN I listened to this:
https://anchor.fm/gothridgemanor/episodes/Working-on-the-Campaign-e3ck6l

And right around the time I was listening to Tim's podcast, I was also talking with Chris Gonnerman about Iron Falcon.  BTW there's a new iron falcon group on mewe, check it out.

Not to mention the ever entertaining google hangouts thread that I'm a part of with Matt and the crew.

So more inspiration has struck me.

I've toyed with running mystara, greyhawk (recently) and a pile of other campaigns in the last few years.

Here's the problem.  Well 1.  I have a.d.d.  2.  (the most important) I'm not currently running any games.  So instead of focusing on my current game, I keep thinking of new and fun ideas to try.

The latest thing that's on my mind is to finally run Black Marsh.  I even have a starting point.  And of course I'm thinking using iron falcon would be fun.  Even though I've stated often that Whitebox would be handy especially when running a game online.

So I'm off to write a players campaign notes for black marsh.

Maybe I'll get my shit together and run a one shot soon.

Posted by shanepatrickward at 11:49 AM