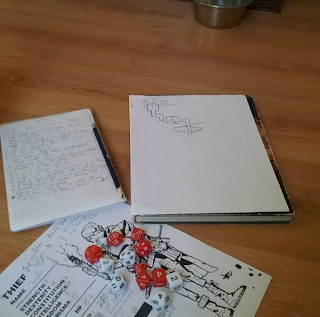 Alright so I think I sorted lost track on how many sessions we have had.  I believe the Gonzo session with Matt was 2 - 3 sessions.  And now the more old school vibe session has been at least 2.  Unfortunately I don't completely remember everything that happened in session 1, but I'll try my best here.  More of this will be session 2 (at least the action bits).

First and foremost it was a fucking blast! It's really nice to game again, and on a regular basis.  As well the black hack is a very easy system for me to grasp (I'm not a fan of getting bogged dow with mechanics).

Colin, Alex, Steve, and Vance all joined in (and I f I missed someone I'm very sorry).  We had a good core group of classes, with basically one of each.  My silly thief Jax Whindlehen (who is a carry over from the gonzo session) is impetuses at the very least.  Unlike a typical old school thief, he likes to see what things do.  He doesn't always sneak into a room, if there's a button he will push it, if there's a door he'll open it.  It's just him.  Which of course makes for the cleric (thanks Vance!) having to save his ass on a regular basis.

So we get to the mountains and this northern village which has been under the icy thumb of a snow queen.  (cue the frozen jokes).  The feel of the game is very "north of the wall", with wildling types etc.   We basically found out that we need to stop the snow queen.  And off we go to the lair!

Once we got in the dungeon, we found a bunch of tunnels, and tombs.  I managed to find quite a bit of gold (that always makes a thief happy!).  One of the tombs had some undead, and thankfully the cleric managed to banish them fairly quickly.  I can't quite remember what his god was, but it was entertaining (I think it was a random roll in the back of the book).

We got into this room that had a waterfall and a drain below us, which was odd.  But we kept moving.  Finally we made it to this room where there were 6 wildling types arguing.  I believe Matt expected us to straight up fight.  But in the last game, instead of negotiating when we were supposed to, we fought.  So this time I decided I'd attempt to negotiate.  I stepped into the room that had some Iron doors open and basically said "Ola me amigos!"  Which threw them for a loop.  One of them was chipping away at some ice (looks like there was something behind it).

After a successful charisma check, they sorta seemed to be cool with us.  Although they were pushing me a little bit.  I side stepped and went down a hall way.  The rest of the hero's didn't know what was happening with me, and went into the room.  All of a sudden this huge 14 foot tall twig golem burst out of the ice and a fight ensued.  There was a pile of rubble around the room, and at one point I had to haul people over it into the tunnel.  The widlings followed.... err ran right past me! hahaha.  Prior to this one of the ladies had grabbed what appeared to be a cloak that was embedded in the ice.

We made it down a hall way, with the monster sufficiently trapped (the hallways were too short for him to get thru!).  We get into this room that's basically a giant hockey rink of ice with these hug icebergs.  After a few successful tests we moved one of the icebergs blocking our way, only to find another.  This process kept going until a major fail happened.  Colin (Jin) and I fell thru the ice and down into the drain waterfall area.  I got knocked right out.  the other's managed to get thru.

After a bit of time passed, I was awoken to Jin screaming at me to get up.  Damn it we have to go back and take on that golem.  A bunch of the wildlings fell down with us, and a few died.  The rest we made a deal with to fight the golem. I grabbed the magical cloak from the dead lady and moved on.  It appears to basically keep me super warm! wooo. I hazard to guess this will help us.

We go back, beat the crap outta the golem with a few successful rolls and then meet up with everyone at a rope bridge.  As we cross (I went first I believe) ghosts of peasants started filling the chamber around the bridge.  It was very much an indiana jones bridge over a huge deep dark hole.  The cleric thankfully banished enough of them to get us across the bridge without any casualties.

And that my friends is where we left off.  Not too bad for 3 hours of play.

Can't wait for the next game.

Posted by shanepatrickward at 6:50 AM