My wife saw these at the dollarstore yesterday.  I'm going to get her to grab them.  She figured they were a bit bigger than regular minis, which should work out perfectly!  I doubt that they will stand up, so I may cut up a cereal box and see if I can glue them somehow.  I mean for $3 why not right! 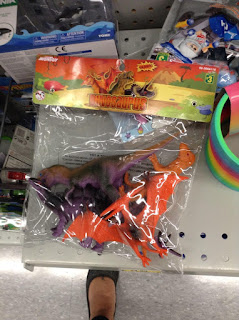 Over the years I've found some pretty cool stuff.  I picked up about 20 D6s one time.  I grabbed a bunch of coloured blocks that I've used as "spell slots" when I played 5e.  Basically "green" was first level, red second, etc.  As I spent spells I'd just put them back in my bag.

Obviously loose leaf, pens, yadda are all handy to pick up when you are there.  If I was running a long campaign I'd even consider grabbing a notebook for everyone.

Oh I almost forgot, duotangs are infinitely handy! I've printed off a bunch of charts, tables, adventures, and rules that all get stuck in some random duotang.

If you get a chance go to your local dollarstore and see what you can see.  Think outside the box, you never know what you will find.  My wife said to me "they had star wars characters, but they were bigger than minis".  Me:  "That's fine,  I'll run some WEG Star Wars D6 at some point.  Size wise it doesn't really matter".  Turns out they were fairly cheap!  So I think I gotta do a run to the dollarstore soon and go on a spending spree! hahaha.