I apologize if I've been a bit quiet lately.  I keep thinking "I should do a blog, or do another podcast".  But by the time I sit down to do it, everything pops out of my head.  I suppose that happens.  In all honesty I think that it comes down to the season.  It's finally getting nice out in the land of Winter!  So there's other things to do.

I'm hoping to get the old school group together soon, to run session 2 of the Isle of Dread.  There will be a play report after that.  I'm also slowly working on a blog detailing the machinations of the Isle NPCs. 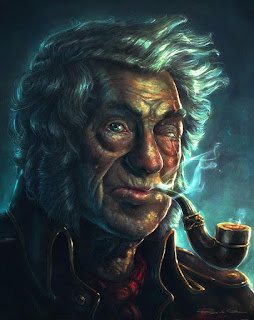 meet Ramses, old sailor npc that the PCs met while in Specularm. He was quite happy to accompany them, as it had been a very long time since he had went on adventure. He's really a jack of all trades, he knows a few spells, is quick with a sword and can pick a lock. He has a score to settle with the pirates near the isle and the merchant clans in kamareikos.Image via :Old-Pirate by Grafik.deviantart.com

The other thing I'm working on is a small hexcrawl.  I had posted on mewe asking for help filling out a hexmap that I built using:

Thus far there is twenty two entries, out of one hundred.  I figure fifty entries is probably sufficient.  Currently I'm code naming it Weird Wayfaring.  Whenever it's done I'll post a link to a google drive document.

Another fun thing, there's a new entry in the 10 Monster setting:  https://savemycampaign.wordpress.com/2019/05/13/10-monster-setting/

I'm enjoying how this idea has picked up some steam.  For the complete list you can go here, and for the information about the idea here.

Other than that, I've had a few random writing ideas that I've been working on, but I'm at the point of scraping some of them (as they are exciting me less than they were).  At some point I'd like to write down my small campaign world that I used for our old school group.  It may end up being a small hex crawl.  It was very traditional fantasy (almost high?).  You can read the play reports here.  "Shanes silly fantasy campaign".  This was the thought that ran thru my head last night when I couldn't sleep.  I always find when I'm having difficulty writing something to stop the big project, and work on a smaller project.  The problem becomes that I never finish the big project.  (honestly the list is endless! Remember when I was writing a mega dungeon LMFAO!).

There was a discussion on the Blueholme Mewe group regarding the following:

I know B/X is the bad boy on the block and S&W seems to be the OSR mainstay having long dethroned OSRIC.... I believe many of these recent Kickstarters are missing out by not using BlueHolme as the basis for their OSR product.
What is the roadblock? What can we do?

My personal thoughts on this are:

1.  Michael is an awesome cat and if you are looking for a license for Blueholme, look no further:  https://dreamscapedesign.net/compatibility-licences/

2.  There is always a "Flavour of the month" when it comes to the retro clone scene, there's not much to be done about it honestly.  Authors can take a more system neutral stance if they like (include ascending and descending AC for example).   I think part of the reason that S&W is so popular to write for is that you can pretty much use any module with it, without too much farting around.  (I'm currently running Isle of Dread with S&W Whitebox).

3.  I've done my best to try and bring attention to Blueholme, with the Baron series and Dusty Door.    I am unsure if my efforts have been met with resistance, or have fallen on deaf ears.  The possibility exists that some of the stuff I've written/worked on might be a little bit outside of the box.  That said I'll continue to write for Blueholme as I really enjoy it.  Specifically I really like writing for the Prentice Rules, because I find writing for 1st to 3rd level is very much in my wheel house.

Last night, I fell down a rabbit hole of awful.  I went to a popular OSR blog site, read a post, then followed the rest of the conversation on fb and twitter (well one side of it).  It's human nature sometimes to read thru the drama.  In the end (after about a half hour of fucking around) I realized that I'm very happy that I'm seeing less drama nowadays from the circles that I spend time in.

Partially the reason that I'm seeing less drama is that I've curated my mewe list better than my G+ list, and the fact that the OSR really did split completely when G+ died.  The only real issue I'm having nowadays is that I follow people on Twitter, FB, Mewe, Instagram and now discord! ACHK! I once again need to sit down and decide what the reason for my participation in social sites.  An example of this is I really need to trim down people on IG (because I see the same post on fb).  In all honesty I should delete IG.

Yup that got really rambly....

I hope you have a good day!


Posted by shanepatrickward at 7:21 AM