One Page Dungeon For LL & Basic

Just a note, this will be appearing on drivethrurpg shortly, it will be "Pay what you want" in the meantime, feel free to copy and paste.  Cheers!
The Lizardmen Of Illzathatch is an unofficial low level adventure module compatible with the Labyrinth Lord. 3 Toadstools publishing is not affiliated with Daniel Proctor, Goblinoid Games Copyright 2006 – 2009. (Font, layout, style of artwork, etc.) Are reserved as Product Identity. This game is licensed under OPENGAME LICENSE Version 1.0a 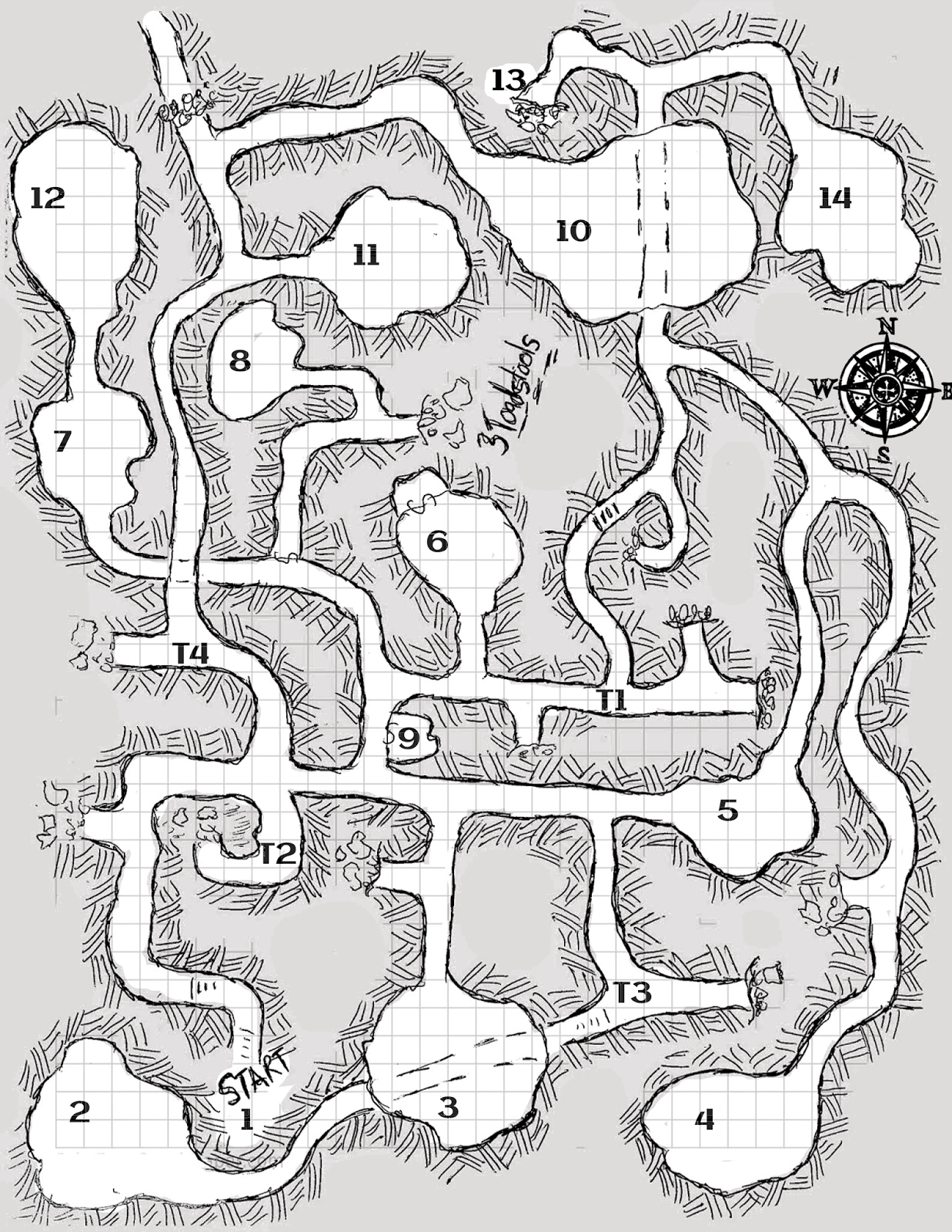 Introduction
The green dragon Illzathatch has been dispatched by local heroes “The Shields of Atreu”, thus ending his reign of terror across the countryside.  Only one problem remains, the adventuring party left to raid the lair of the dragon, they have not been seen since.
Wandering Monsters 1D6
1 – Insect Swarm
2 – Bandits (1d4)
3 – Lizard Men (1d4)
4 – Normal Rats (1d6)
5 – Normal Bats (1d4)
6 – Pit Vipers (1d4)
1 – Entrance
From the outside of the cave, you can see stairs leading down into the depths.  Scrawled on the wall in the goblin tongue “Beware of Illzathatch, soul eater”.

2 – Dead Adventurers
The room is 25’ x 25’.  The entire room is covered in ash, the walls blackened.  Sprawled around the room are 4 bodies, burnt beyond recognition.
*This is what is left of the Shields of Atreu.  None of their armor is useable by the PC’s.  However they carry 160 GP’s, 35 SP’s (In total), There is a Warhammer, a short sword +1, a silver dagger and a mace.  There are also four shields with the emblem of the “Shields Of Atreu”.

3 – The Doppleganger
The door to this room is locked.  The room is 20’ x 30’.  It appears to have been a kitchen at one point.  There are 4 dead goblins piled up in one corner of the room.  On the south side of the room is a small hearth, sitting in front of it is a Dwarf, chugging an ale.  Lying on the floor is a Warhammer,
and a shield with the symbol of the “Shields Of Atreu” adventuring group.  There are a few barrels in the room and a chest.

4 – Not Exactly The Dragon’s Lair
This room is 25’ x 15”’, there is a large depression in the centre of the room that is 10 feet deep, on a gradual slope.  There is a pile of coins within the depression, all glittering in the torchlight.
*this is an illusion, each member of the party must save vs spell.  There is actually a large pit, any PC failing the saving throw has a 1 in 6 chance of falling into the pit 2D6 damage.

5 - Why are there lizard men here?
This room is 25’ x 15’.  The door is barred shut.  (A successful strength check will open it).  Inside the room is a smithy, and various weapons.  A large hearth is being used by a Lizard man to create weapons.  The other lizardmen in the room are playing a dice game at a nearby table.

4 Lizardmen AC 5, HD 2+1, Move 60’ Att 1 weapon, Damage Handaxe 1d6+1, Save As Fighter 2, Morale 12.  XP 25 Each
* The lizardmen are minions of the evil dragon Illzathatch, they were not so recently under a charm spell by the dragon.
Below the hearth there is a secret compartment that contains 500 GP`s.  A successful search for secret doors (2 in 6 chance) will reveal the compartment.  The compartment is locked and trapped with a special poison that causes 1d4 damage and will also damage the PC`s intelligence by -2.

6 - Illzathatch`s Lair
This room is 15`x 20`.  The door to this room is wizard locked (by the spell Wizard Lock).  It can only be opened by a Knock spell, and or using the command word ``Breeyark!``.  Of course the players will not know this.  There are runes written on the door that read `` Home of Illzathatch``.
Within the room is the spawn of Illzathatch, a young green dragon named Hazathatch.  The ceiling of the room is open and you can see blue sky above, natural sunlight bathes the room.  From the ground the ceiling is 25` high.  It is protected by an illusion on the outside so that passersby will think that it’s a rocky outcropping.

Hazathatch Green Dragon AC 3, HD 4, Move 90` Att 2 Claws 1d4 each, breath weapon chlorine gas 1d12.  XP 125 Spells: Can cast 2 – 1st level spells, and 1 – 2nd Level Spell.  Knows the following spells, invisibility, web, sleep, wizard lock, sleep.
As per usual the dragon is lying upon heaps of gold and jewels.  There is 1500 SPs, 800 GPs, A Sword +1, 2 suits of leather armor, a spellbook containing the following spells:  Invisibility, Web, Sleep.
There is a secret door within the room; it is trapped with a sliding blade.  If the door is found, but the trap is not noticed, the door will appear to open, and a large blade will slide down from the ceiling doing 2D6+2 damage.  A successful dexterity check at -2 will save the hero from losing a limb!

7 – Common Room
15` x 20`.  This room is the common room, sleeping quarters of the tribe of lizardmen.  There are make shift beds around the room, a large firepit in the centre.

8 - Healing waters
This room is quite small, in the centre is a well, there is a small bucket beside the well.
* The well will heal 1d4 of damage per person, (but not exceed their starting hit points).  No water can be removed from the room in a vial or by any other means.  If the PC`s attempt to use the well more than once, the water will not have any effect.
Upon leaving the room, the PC`s will encounter a insect swarm.

10 – Bandits & Lizardmen Everywhere!
This cavernous room is 40’ x 30’, and about 30’ high.  There are 4 bandits and 6 lizardmen fighting it out in the room.  (On a roll of 1, the bandits or lizardmen notice the PC’s, 1d6).  The room appears to be leftovers of what used to be a torture chamber.  There are strange instruments of torture littered around the room, most in disrepair.  A few skeletons are chained to the walls.  There are large carved snake heads in the walls, 4 in total, about 6’ high.  Each has 2 GP’s for eyes.

11 – This ceiling looks a little suspect!
This room is 20`x 20`.  The door to this room is unlocked and ajar.  The floor of the room has a checker board pattern; it appears to be made of granite.  Some tiles are black, others are white.  At the far end of the room is an altar with atleast 30 vials, each with a slightly different color.
The room is a trap, regardless of what tile the PC`s step on, once they have stepped on at least 3 tiles in the room the ceiling will cave in on them, and the door to the room will close.  Celling block falls save vs turn to stone or take 1d10 points of damage. The only way to get to the altar is to levitate.
The altar has 2 healing potions, 1 potion of Mirror Image.  All the rest of the potions are a trick to get the PC`s to check them out.  They can try them if the like, but nothing will happen.

12 - Statue Of Illzathatch
This room is 30`x 20`.  The door to this room is locked.  (One of the lizardmen from room 7 has a key).  In the centre of the room is a large crudely made statue of Illzathatch.  The eyes of the dragon are made from gems (50 GP each), and the teeth appear to sparkle in the torchlight (20 silver teeth – 10 GP each).  There are 4 lizardmen in the room working on a second statue.

13 - Uh-oh! A Cave In!
It appears that a few lizard men were working on creating a new tunnel here, however a cave in must have happened recently as all the PC’s can make out are various limbs under the rubble.  Pickaxes and other mining equipment litter the ground, including a wheelbarrow.  If the PC’s wait here for any reason whatsoever there is a chance of another cave in, as it is quite unstable.  (Roll 1d8, on a roll of 1 another cave in occurs, anyone within the immediate area must save vs turn to stone, if they fail they receive 2d6 damage).

14 – The empty room
This room is 20’ x 25’.  The door to this room is locked.  Inside the room are 5 statues of lizardmen, one on each corner of the room.  In the centre of the room is a pentagram drawn on the floor.

Traps
T1 – Poison gas
When the PC’s enter this area, have them all check their wisdom.  If anyone succeeds they smell a strong odour.  There is a pressure plate on the ground that will release poison gas.  The poison does 1d4+1 damage and effects the constitution of everyone.  -1 CON.

T2 – Blades Of Terror
As the PC’s approach this area they see a beheaded adventurer lying in a pool of his own blood.  (The adventurer is wearing leather armor +1 and has a silver dagger, 15 GP’s in his pouch).  If a search for secret doors is made, the PC’s will find a small lever in the wall that stops the trap.  If any PC’s continues forward 2 giant blades will come out of the walls causing 3D6 damage to anyone.  Allow a saving throw VS Death ray for half damage.

T3 Pit Trap
There is a large pit trap here, which is 15” deep.  A Save VS Spell will show the PC’s that there is a illusion of a floor over the pit.  Anyone failing the spell check will fall into the pit trap 1D6 damage.

T4 – The Broken Trap
Lying in the centre of the floor is a very large looking bear trap surrounded by blood.  It has already been sprung.  The only thing that remains is a leg still attached to the trap.

Posted by shanepatrickward at 11:31 AM