As some of you may or may not know my day job is a recording engineer, (among other things).  As the years have gone by, I've had the pleasure of working with some very amazing players, who have become great friends over the years.  I decided just lately to start getting my Telecaster signed by these guys.  The tele is a cheap chinese guitar that's been modded heavily over the years, so much so I think I took a $140 guitar and put somewhere in the neighborhood of $400 into it.

I know have 2 signatures.

Wayne Link - pedal steel virtuoso, most notably known for the TV show "The Western Hour" and playing with the band "Red Wine".  He's been on the country music scene in Manitoba for years.  I've made a bunch of records with him, sometimes as a session guy and sometimes his own records.

John Hildebrand - A fellow recording engineer, we've have sat and talked about audio for so many hours I've lost count honestly, there's so much BS you'd need to get a shovel to get into the control room!  John owned the famed "Century 21 Studios", I acquired one of his old recording consoles that I used for many years.  At one point in time he had a "Neve" console that he sold to AC/DC.  He was also a member of the "Eternals" 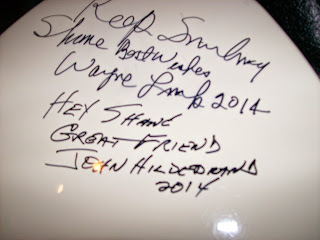 As I said I have a very specific set of signatures that I'd like to have on there.


Posted by shanepatrickward at 12:23 PM