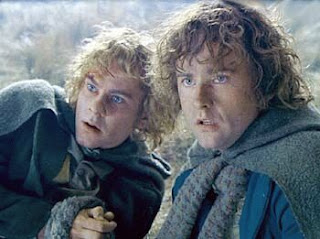 Favorite PC of your own.  I don't get to play a lot as a player, more often than not I'm the DM/GM. The last time I played, it was a play by post game, which was a lot of fun.  I played a halfling thief. Gwimble Lardfeet.  A fairly rotund, but still quick like a cat, always hungry, the only reason he stole anything was for food money halfling thief.  These are the types of PC's I like to play.  As well this is the type of PC my wife likes to play.  Basically Pipin Or Mary.  Her latest character is exactly that.  When she met the rest of the adventuring party they were in Neverwinter at the hamster races.  She caught one of the players cheating and called him on it.  A fight ensued and they all became friends after the fact.

This reminds me to start reading all of my players character sheets and start pulling out little clues that I can use in upcoming adventures.  But I digress....

The next PC I create is going to be the Barbarian type, possible Kodarr as he's just a friggin bad assed.  If you haven't read Kodarrs Komandments you really need to, sometimes they are funny, more often than not there's a nugget of good advice.