Right from the first paragraph you know that your in for a f**king ride.

You'll be adventuring in a parallel world of New York City, circa 1983. After a short but calamitous global thermal nuclear war, the urban landscape became a burned-out wasteland of ruin and mutation. Survivors congregate in the city that never sleeps, making it their nightmarish playground.. a shit hole of degeneracy & and wickedness.

As the author states, running a Crimson Dragon Slayer campaign " If it's possible to imagine whatever's going on in some late-night, low-budget 70's or 80's flick, then said thing is appropriate for Crimson Dragon Slayer. Appropriate?  Nay, encouraged! The more ridiculous, the better."  Which perfectly sets up this module! (I need to run this game man!).  Considering I did add a little thoughts here & there to the development of Crimson Dragon Slayer.

That being said this game isn't for the faint of heart, or for that matter "typical role players".  When I say that, I mean you need a group of players that are into this type of fantasy world.  Not the usual damsel's in distress (more like damsels in a state of undress!), Orc's, Wizards, Elves! BAH make em purple with tentacles and slime and your getting closer.  etc.  Crimson Dragon Slayer is meant to be a fun, engaging alternative to the usual role playing tropes that we hold near and dear.

Note:  The opening mentions the home world of "Thule".  I hazard to guess this is the world of Crimson Dragon Slayer.  Since I can't quite find my copy of the rules, I am going to go with that.  Having said that the premise of the game is an alternate reality, so feel free to dream up your own world to run this campaign in.

Conversion notes:  If you want a more traditional Armor Class, all you have to do is add 10 to what's listed. For the Attack Bonus, simply give a +1 for every Hit Die. Everything else should be interpreted by the Dragon Master as he sees fit.

Having read & played a few of Venger's modules, they are relatively easy to convert to any Old School system.  For me this screams Mutant Future, or a 5e mashup.  That said I'm sure it was written with Crimson Dragon Slayer in mind originally.  Although advertised as "Best of all... this is more or less compatible with any OSR game that uses Hit Dice, Armor Class, etc.  No Escape from New York is 85% of a full-fledged micro-campaign just waiting for your grimy, crimson-soaked fingertips.  Caress this PDF if you dare!"

Random note:  Venger, why didn't you call it Crimson Demon Slayer?  Every time I write CDS I screw it up and have to go back and revise.  hahaha

File under best name for a random table ever:  REASONS WHY YOUR BUDDY IS A DARK SIDE JACK-HOLE

As much as "Keep on the borderlands" is a perfect starting point module for Basic D&D, No Escape From New York perfectly suits trying out CDS for the first time.   It throws you into the twisted mind of the author and the game.  After running thru this module you will have perfect jumping off points to continue your campaigns within the CDS system.

The way the module is laid out, there are all kinds of random things that can happen, and a set of "events" as I'd like to call them.  Jumping off points to move the story along.  Obviously the GM can follow the chosen path (although its not a railroad whatsoever), or take a hard left turn and go off on some other wildly extreme tangent (preferably with tentacles!).

The module contains amazing BW art that we have come to expect from all of Venger's writings.  The evoke the world that you are playing in.  And as a GM they help to get you right in the zone.

There isn't really any kind of maps of New York, as the author states its good to start off small when building a campaign.  There's enough going on within the module to get you there without a map of the area.  That said even a cross section street view with a few area's of interest would have been handy.  Easily solved by googling old city maps of New York. 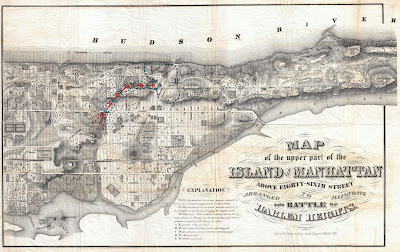 I'm totally in love with all of the 80's references, including the "Gang of three".  Nope I'm not telling you who is in the gang.  Buy the module and find out!

Any module that includes references to the "Ultimate Wet T Shirt" contest is awesome in my book!  The whole premise of this adventure takes you on one helluva a crazy ride.  In all honesty if I was running this, I'd make sure the PC's were pretty tough, just so I could get them thru the whole thing!
The module includes 3 new spells for Old School & CDS play.   As well there's a bunch of awesome tables, including ones for hilarious character name generation.

All in all, this is a great adventure!  Clocking in at 24 pages, it leaves me wanting a bit more.  But I know if I was running this I'd start adding all my own little flourishes to make it even that much better.  Which is the idea of a module isn't it? We can't think of everything as publishers.  And a system like CDS really allows for the imagination of the players & GM to take over and make it theirs.


Posted by shanepatrickward at 10:47 AM