Product Description.
An open sandbox game where you have free reign over your destiny.  Are you a carpenter with dreams of becoming the leader of the largest merchant’s guild on Thelal?  A delinquent, destined to lead armies and conquer evil? Or are you a simple apprentice  to a priest in your small hometown, with designs on being the head of your order?
The choice is entirely up to you. Design any type of character you like, and enter the world of Thelal.

Introduction:
The world of Thelal is a harmonious place, well looked after by the deities that reign over it, although it is not always without strife. The world has faced drought, famine, blizzards, disease, and war as would be expected. Beyond these obstacles, however, lies a looming darkness. An evil foreseen by the Fae prophets…

Editors note:  This caught my eye right away!

Netherstorm combines mechanics & ideas that we are familiar with, alongside new concepts & dice rolling mechanics.  Get our your 10 siders and percentile dice!  The entire game is based entirely around those.  The book is beautiful!  clocking in at 128 pages.  Full color art, 2 column awesomeness.  The game is based on a point buy system.  Of which I've had some experience with.

I've fallen in love with all of the different races that you can be within this game.  Here's a sampling:
The Fae - In preparation for the Netherstorm, the Fairies magically adapted a portion of their population to better function with the other races. These adapted Fairies are called Fae.

Kentrona - First springing up in the desert regions, the Kentrona are a tough warrior race. Standing between 6’ and 7’, the muscular builds and four arms of the Kentrona are ideal for combat. Their obsidian skin, the small, straw-like white or pale blond patch of hair on their heads and their naturally expressionless faces all combine to make the Kentrona intimidating and fearsome.

as well as the Muera, Peuroma, The Sidhe , Wilderfolk & Humans make up the rest of the playable races within the game. The interesting thing about the races are that each race has advantages & disadvantages built in

Normally when learning the mechanics of a game I roll up a Character and then create a few mock battles just to get the idea of how the whole thing plays out.  Which is exactly what I did, and which is partially why this review took a little while for me to finish.  I created a Kentrona Fighter, as they are well suited for that type of role within the game.  Character creation took a bit to wrap my head around.  However that is nothing against these rules, character creation in any system takes me a bit to wrap my head around, especially the first time.   (See beginning of paragraph about how I go about the whole process.  I still haven't quite wrapped my head around 5e lol).

Once you pick a race for your character, you immediately jump to their backstory.  I like games that include this as it helps to ground your character into the world your playing in.  There are about 30 or so backstory attributes that you can add to your character, some are detrimental some are beneficial. The cool thing about the system is that it really allows you to create the character that you want to play.

After that its time to roll up attributes, skills & spells (provided your a magic user). 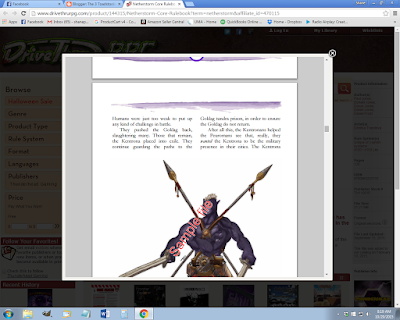 Netherstorm has a somewhat unique magic system. One of the design goals was to make everything as customizable as possible and this extends to the spells. This section begins with an explanation of how magic works and how spells are used. After this, there is a section on Spell Creation. Instead of the game designers coming up with a few dozen standardized spells, a system was developed that allows the player (with GM approval) to make an enormous variety of spells.  The magic system begins with the understanding that spells are the focusing of spiritual energies to achieve a supernatural effect. Because of this, your spells rely on your Spirituality, which will play into both spell accuracy and strength.

Within the rules there are a few spell concepts, however its basically up to the player to create their own, which is infinitely cool in my opinion.  It goes to the whole keeping this game as open ended as possible!

Then equipment, and there's a ton to pick from, pretty much anything you can think of medieval wise is covered within the equipment section.

Then final touches: Finally, there are the miscellaneous details that round out the character. This information may seem like useless trivia, but it can be a significant part of role-playing. For example, how well-known is your character in the area where she lives?

The games includes about 30 or so monsters, with stats.  Some of which are familiar monsters and others are wonderfully new and enjoyable!

I suppose my only caveat is that the world of Netherstorm is briefly detailed.  While that isn't a huge issue for myself personally, I know that some GM's like to have a world in which to play in, that is highly detailed.  There is a few pages of the world, and deity's, etc.  I would love to see a campaign setting style book come out for this rule set.  I would hazard to guess that the guys at Thunderhead gaming are probably thinking the very same thing!

All in all those this is a pretty cool system! and its worth giving it a try.

Posted by shanepatrickward at 6:33 AM