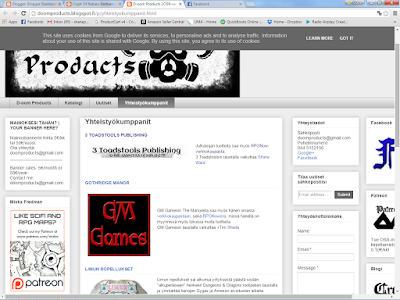 Super awesome! In order to spraed more OSR goodness, we've partnered with D-oom Products.  They are putting together & printing some of the 3 Toadstools modules, and selling them in Finland (Why yes my mind is officially blown!).  The cool thing about this is that D-oom are great to work with!  +Thaumiel Nerub has been attending little cons and has converted some of the modules to Finnish as well (also super neat).  I love how small this community actually is.  And the fact that we can work together to do fun things like this.

Here are the links.
http://doomproducts.blogspot.fi/p/yhteistyokumppanit.html

As well we have been co-writing a hex crawl, its currently in its infant stages, but here's another little preview. 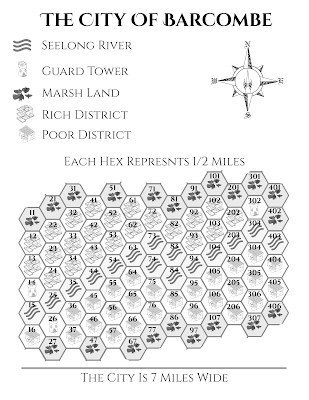 205  Arena.  Within this hex is a grand gladiator arena.  It is open most days from early afternoon until evening.  PC’s can bet on gladiators from either the red or black team.  The process of betting is as follows:  Players & the GM pick (the GM playing the part of the “house”) which team they would like to win.  They then bet in gold pieces, minimum bet is 5 GP’s.  Everyone rolls percentile dice (d%), whoever is the highest, their gladiator won.  In the case of a tie, the pot is split.

A very popular gladiator named “Renald The Ravanger” has been out of commission for the past few weeks.  No one has seen him in atleast a fortnight.  His residence is a room within the arena complex.  If the PC’s investigate his room, they will find a handwritten note detailing his absence.  He has left the city of Barcombe in search of his long lost love.  Another note on the dresser points to a extremely expensive ransom for her safe return. It is signed by “Craglex”.  (Craglex is an Orc warlord, who is currently residing in a small cave south of the city in hex 27).
Posted by shanepatrickward at 8:55 AM