A few weeks ago we had our first session of "Out Of The Abyss". I've been chomping at the bit to play a character. I rolled up a Drow priestess, then decided against it. After flipping thru the phb I stumbled upon the druid class. I remember having rolled up one at some point during the 2e era, I believe it was an NPC at the time.

So with 3d6 a few times, Zagnap Rustleglonmph was born. I purposely rolled the 3d6 not in order, but just wrote the results down on a paper, and moved them around till he felt right. The reason is, I wanted atleast one negative number. I'm already finding these 5e characters to be way over powered. However even after I got him basically done, I went thru an added all the racial bonuses and he managed to get a little more built up. Oh and rather try and decipher my bad handwriting I just did a typed up version of him in word, rather than use a character sheet.

Here is his background. 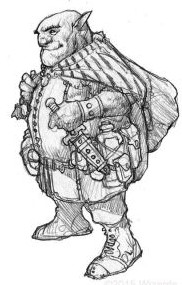 Zagnap comes from a small svirfneblin mining community located north of Daggerdale, (however deep underground).  During a exploratory search of the underdark far from the community he was separated from his group.  Zagnap searched for his group for days, finally coming upon them, they had been slain by a group of monsters.  None were left alive.  Seeing the harsh realities of leaving the confines of the community, Zagnap decided that it was best to see what else was out there.  His adventurous spirit took over.  Carrying with him a staff he made out of a old petrified toadtool, his leather armour & sling made from the hide of a Rothe, he stepped out into the underdark in search of answers.  Answers to the world below.  He set out to write a book about the “Underdark Ecologies”, detailed within is plant & humanoid life.  As time went on he stumbled upon a meeting between a very select group of residents.  “The circle of the 5”, a Underdark druidic order made up of a variety of races.  All of which follow the teachings of Segojan Earthcaller.  Zagnap is currently an initiate of the order, and will not be officially inducted into the circle until one of the five dies.

My intention for Zagnap is to be very much like Allanon from the Shanara series. http://shannara.wikia.com/wiki/Allanon

My wife is playing a half elf fighter with a pirate background, she plans to be very much like the "Dread pirate roberts", which I'm rather excited about. A natural born leader.

Alright down to the brass tacks of the session. It was in a word or two, f**king awesome. Our DM +Adam Lerner it was his first time. I'm sure he may have had a few little moments of worry, but he did really awesome! He had different voices for everyone! Different storylines, etc. He did a great job ad-libbing. The key I find to being a good DM is to just roll with it, let the players keep it going, and that's exactly what he did. I need to talk to him about what if anything he was reading before DMing for the first time. Anyways, we started the game off being trapped in a drow prison apparently. Which is a interesting way to explain how all the characters met. Although I know in some gaming circles this is slightly frowned upon because it takes away choice, I thoroughly enjoyed the harsh realities of "how in the hell do we get outta this place????".

After some talk with a few of the prisoners, and being led away to work near a water fall, we decided to make a break for it. Fighting our way thru a bunch of drow (even with our DM apparently rolling crits behind the screen and fudging some numbers). We managed to make it to a outpost, inside was all of our equipment! HUZZAH!

At this point, my wife had promptly fallen asleep on the couch, so her character was basically along for the ride. Note, she had gotten up at 5 am that morning, and we had went to bed quite late. We called it shortly after finding our equipment. Now to figure out what the heck we are doing, were we are going etc. 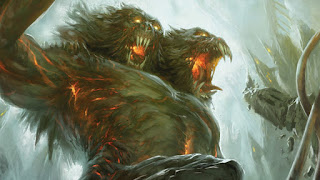 I have just finished reading archmage, so I have a bit more background to the adventure, of which I'm not planning on using any knowledge within the game. It seems to me from reading the DMG and the Monster Manual, that this new edition of the game, is very geared towards fighting demons. Something that I'm excited about as a player. But from a DM standpoint, I want to make sure that any games I run don't have the overarching demon stuff in it, as part of the story line. I've been slowly concocting a world for my players whenever we run a game that I'm DMing. It should be interesting. That said, I'm very happy with the results from that evening. Playing is super fun as a character, my one and only regret is that I didn't choose a silly accent. Maybe Zagnap will start talking a bit more differently next game.

The really odd ball thing with our group is that out of the 5 of us, we have 3 DM's, which is actually quite cool. I don't think anyone is going to suffer from burnout, we will just switch.

Posted by shanepatrickward at 8:00 AM