The other night I wasn't able to sleep because I was thinking about Swords & Sorcery (I've been reading a lot of Conan), as well Fighting Fantasy & Thunderrift.  A few things I've come up with.

The next time I run a campaign I'd like to do the following.

After reading Thunerrift, its a perfect campaign for a very LOTR type setting.  Elves, Dwarves and Humans and all the tensions that come along with it.  However I think in order to suit my needs I'd like to change the history a bit.  Within Thunderrift there was a great plague & evil that spread accross the lands.  (yadda yadda, Sauron).  Rather than run the module exactly, what I'd rather do is the following.   The council still exists, and the pacts made by all the good aligned races still exist.  However, another plague has swept thru thunderrift decimating the races of Dwarves & Elves.  Few exist, and live in deep pockets (underground or in forests).  The landscape of Thunderrift has changed, the towns that exist are more like bordertowns, were free people live and defend their territory.  Warlords have taken over much of the resources, and city's/towns.  They war against each other.  Whole tribes of barbarian clans have risen up in the aftermath, living off the land, and reverting to more barbaric ways.  Necromancers delve in the deep trying to bring back old gods.  The old dwarven cities are now overrun.

The world is ripe for hero's.

I'd like to run Port Blacksand again.  Probably by the book.  I remember fondly running it and having such a good time with the city itself.  As well the adventure within the book, if I remember correctly leaves lots of options for more adventures.

Another intriguing section of the map, very close to Port Blacksand is Fire Island.


Fire Island used to be a prison colony, guarded by a tribe of paid Lizard Men.[1]
On the island there is a volcano, prison colony, a gold mine, jungles, swamps, a gorge and a river, all surrounded by sandy beaches.[2]
The colony was founded in 192AC as a futile attempt by the good prince, Prince Olaf, to rid his land of undesirables. Fire Island was abandoned, the Lizard Men received no pay and therefore took over. One prison guard proclaimed himself King. This guard was actually a Lizard King anyway and as such well versed in the practice of voodoo and black magic.
Apart from a few escaped prisoners, other inhabitants of the island are Cave Woman, Headhunter (Fire Island)and sometimes a few pirates.[3]
http://fightingfantasy.wikia.com/wiki/Fire_Island
As well Silur Cha - The Lizard men city & the jungles surrounding the southern section of Allansia could make for some interesting adventuring.
The desert of skulls could be a perfect dark sun type setting, with random barbarian tribes, maybe even the "lost city" adventure module included within it.  Hmmm.... 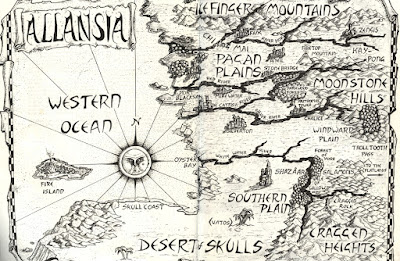 Posted by shanepatrickward at 7:30 AM