I fear for the OSR

Which means WOTC is now going to officially allow third party 5e products.  And not only that, they've created a marketplace for it - http://www.dmsguild.com/

(which also leads me to believe that drivethrurpg, rpgnow, etc may in fact be owned by wotc, take a look at the sites and the dmsguild, pretty similar). EDIT:  They are partnered with them, and do not out right own OBS.

And technically you will be allowed to write for settings like Forgotten Realms if you are using the DM's Guild. 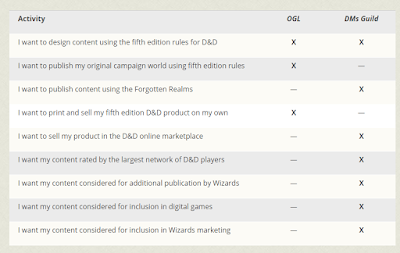 It appears, though that if you want to be a part of the DM's Guild, and publish product specifically for D&D campaign settings, you are going to have to play by their rules.  Which is fine.  As an example "I want to print and sell my fifth edition product" only OGL, not DM's Guild.  Interesting....  However I want to "design content" is both? What is the difference there? Classes VS Adventures? I suppose.

As far as I'm concerned, this is a game changer.  Do you think it is? What is the future going to hold? Specifically what will happen to the OSR?

I worry that 5e mechanics will inevitably creep into the OSR, actually I believe it already has.  I feel like in the next few months, years, there is going to be a LOAD of 5e material.  Which is both good and bad.

Note:  This is pretty genius on WOTC's end.  Why pay people to create for you, when you can sit back and let them do it.

Of course this is going to expand the Forgotten Realms to untold heights, and trying to wrap our collective heads around the "canon" is going to be even more difficult with third party writers.

Here's another one - "I want my content considered for inclusion by Wizards marketing".  That opens some doors for the independent publisher doesn't it!

One thing to consider, is that technically we may be able to write for long forgotten settings like Greyhawk?

So here's the question.... What happens to the OSR as it stands now? It's going to change that's for sure.  As I stated certain 5e mechanics are making their way into the OSR.  (good god I've been even talking about 5e more often than not latetly).

Granted last year was a good year for the OSR, Red & Pleasant Land, Yoon-Suin, Whitestar, the list goes on.

Part of the issue I believe, is that because the OSR is basically "Old School", the whole "fear change" thing comes into play.  To be mired in something that is considered old, negates the idea of being "fresh, new, marketable".  The problem becomes how do you make something fresh, new and marketable, yet retain the Old School feel?  It's obviously been done (see above), but to continue to do so.... Well that is another question isn't it?

Obviously the OSR is not going anywhere at this point.  Is it going to change? Probably.  For the better? who knows, time will tell.  I do believe it is more important than ever to "stick to our collective guns" and keep writing and creating for a system that we all fell in love with when we were kids.


Posted by shanepatrickward at 10:21 AM