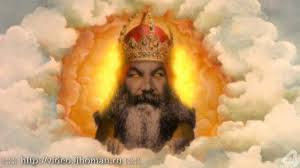 Kicking around the idea of creating a system with factions and renown, not un-similar to the way it is done in 5e.  However it will be based on the God's, and how they oversee the players.  For every act of Goodness or Evil, the PC's will receive 5% to a percentile die.  When it comes time to ask for something from the gods, they will take their starting base percentage of 10% + whatever Renown percentages they've have earned.  This will allow for a progression from peon to a very godly person.  The only issue I can see is that as the Renown grows, it will become vastly easy for the God's to side with the player.  So maybe a compromise.  After say 55% anything that is asked of the God's may come with a Quest, or a negotiation of some sort.

It would of course be up to the GM to give and take away Renown points as far as the God's are concerned.  They could even setup this up for when a player levels up.  Making note of any changes in Renown prior to the leveling.  So the player would have their initial score, and then whenever they leveled up the GM would add that to what he has kept track of.


Posted by shanepatrickward at 1:52 PM