Mini Setting - The Continent Of Crimhuk - The Forests Of Armta

North of Crek Lake lay the forests of Armta.  The forest is densely wooded with evergreen trees.  There are a few path's throughout, some of which may lead north to the lands unknown.  Within the forest is an ancient ruin of an old city.  Getting to it has proved a lot more difficult however.  Prior to the fall of the ancient civilizations of Elves, Dwarves and Halfings, this city was a hub for magical and intelligent thought & study.  The ruins were once known as "Efharion, the city of light".  It has now been over run by "things that go bump in the night".  A very dangerous place.

Deep within the forest it is said that grey humanoids have built a large dwelling within the trees.  Although no one has had communications with these beings outright, there have been rumors of them.  They appear to be about five feet tall with large oval shaped heads, grey in colour, large black eye sockets.

Gang's of bandits and thieves hide out within the forest.  A few local citizens have setup small mining operations near the borders of the forest. 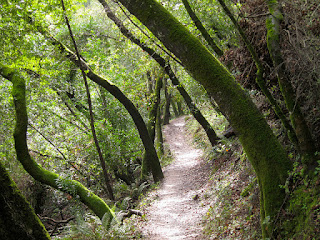 1.  A expedition has been set to find the lost city of light "Efharion", a local lord near Crek lake is paying handsome sums of gold for any information on the exact location of the city.

2.  The forest is alive!  Bushes attempt to strangle you, people loose their whereabouts and get turned around.

3.  A local farm girl was abducted in the middle of the night, there was no trail whatsoever to follow.  The farm is located just south of the forest of Armta.

5.  The forest is haunted, I've seen armies of ghosts moving throughout it at night.

6.  A local gang of thieves have been hitting caravan's near the borders of the forest, a price has been put on their heads.

7.  Raider's from the forests have burned crops & killed off local farmers, it appears they were in search of something.

8.  A mine within the forest has been over run by a group of foul creatures!

9.  The most curious thing I've ever seen!  A large walking construct came out of the forest, turned around and smashed its way back in.  It was 9 feet tall!

10.  A local priest needs ingredients to cure a rampant flu.  All of which are located within the forest of Armta.