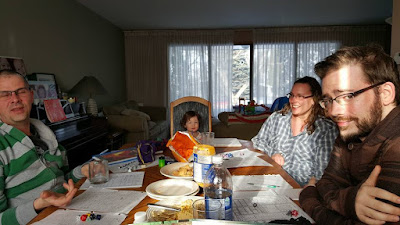 Well we finally made it to Blingdenstone.  Which is apparently in a bit of a state.

(apparently I need to read a bit more Salvatore).

The PC's made their way to a tavern as per usual, after a brief discussion with the Gnomish ruling council.  The gnomish council was going to take care of Zagnap's body, and give him a proper burial.

Our monk (Tolgrin) has a major alcohol problem.  Once the PC's arrived at the tavern (I was playing a NPC half orc during the first part of the adventure).  My new character met them in the bar.  He was sitting with a group of elves when the PC's walked in.  He then stood up and ran over saying "MY VISION HAS COME TRUE!!!! THE GOD'S SPEAK TO ME".  (I'm basically a crazy cleric).

Anyhow, quick discussion, I tell them that I'd love to join them, as I had been sitting in the tavern for weeks on end waiting for the rest of the Elves in my party to leave for home.

At one point the other 2 PC's strongly considered not allowing me to come along.  Which was quite funny.

After relaying my backstory to Tolgrin & Ravana, Tolgrin suggested that I did in fact need a "NEW GOD!".  Hayden (my PC) comes from the neverwinter wood, a small colony of moon elves.  While a child still there was a horrible fire, my parents died and I was taken in by a priest, who I owe my life and religion to.  My entire body is badly burned with scars.  As well, I have a major speech impediment (I spent the whole session talking with my tongue pressed up against the inside of my lips).  Of which I received inspiration.

Our monk then decided to make a rather grand speech to all the NPC's that "If they would like to get off this crazy train, now would be a good time, since Blingdenstone is a fairly safe place".  We managed to have Jim Jar the Gnome leave our little group.  He demanded payment for his time with us.  Since we did not have a clue how  much gold we actually have (as our bard who was keeping track of it wasn't able to make the session yesterday, laying floor boards).  We decided to pay out Jim Jar by giving him a few hand crossbows that we recovered from some dead bodies.  He was more than happy and planned to pay off his debts in Blingdenstone and then open a tavern called the "Rustle & Glomph" named after Zagnap, our departed gnomish druid.  (Which was a nice touch by our DM).

After a few drinks in the tavern we decided to go and check out the marketplace.  Cue random encounter!  We were looking for a gnomish merchant, that we were supposed to deliver some stones to.

ERMAHGERD! Giant floating bloobs of nothingness (Gelatinous cubes).  A fight ensued, some PC's got trapped within.  Ravana saved the day by utterly ripping the cube into itty bitty pieces with her dual rapiers.  #badassed.

I believe we found a few magical items, including a drow sword within the cube.  Which is strange isn't it?

After the fight, my cleric decided to "pray to god", which by the way is Eldath goddess of peace or some such shit.  Turns out one of the NPC's is also named Eldath.  (Cousin perhaps?).  This of course is entertaining.  Eldath.... yes? no not you!

Apparently my piety is called into question, as my god hasn't helped me with my speech impediment and scars yet.

Back to the adventure.  We find the merchant, give him the stones, he tells us to not say too much about them to anyone.  Monk says "that's okay we won't say anything to anyone about the SPICES right... yup the SPICES".  In return we received a sexy gem worth quite a bit of moolah.

The gnomish ruling council proposed that we clear out the north western section of Blingdenstone where the gelatinous cubes are coming from.

We go and check it out.  On the way over there, we talk to some guards that have a Medusa behind a door, locked up.  They want her taken care of.  None of us appear to have a mirror!  Which is probably a good thing as none of us had, had bath's or fixed our hair in sometime.  We decide to leave the Medusa alone for the time being, and make a check at the market for a few mirrors.

We go and check out the northwest section, and great cthulhu! there is a LOT of slime over there.  After a few failed checks to see if we could possibly use acid on the dead cubes, we decide to leave the cavern of slime and make our way back to the market. Of course we had a brief discussion with the king of slime.

and that is where we left off.


Posted by shanepatrickward at 5:46 AM