Mini Setting - The Continent Of Crimhuk - The Frozen 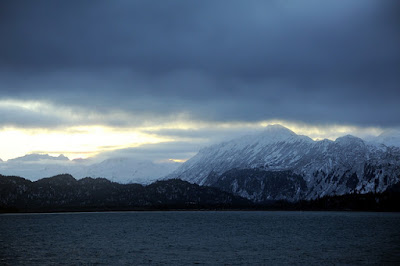 The village of Tilla is a recent addition to the continent of Crimhuck.  It was established within the last few years by travellers who managed to navigate the "impassable sea".  The villager's are known as the "Harr-Gar", a viking-esq people.  They have started to make a home in the frozen, planting hearty crops and scavenging the land.

The land is dotted with tribes of nomads and barbarian raiders.  One tribe in particular the "Gandalah" are extremely vicious.  They have travelled south on more than one occasion, sacking and burning the countryside.  Although recently the Gandalah warships have been spotted moving east into the impassable sea.  On more than one occasion they have attempted to siege the village of Tilla, with mixed results.  The chieftain of the tribe is named "Snirrgrorr the tempted", he is a sadistic vile conqueror.  His only appetite is that of destruction.  The idea that they maybe attempting to travel across the seas, seems quite mysterious.  It has started the rumour that Snirrgrorr may not be in charge of the tribe anymore.

North of the village of Tilla is "The Frozen", a large mountain range that has remained unexplored.  Some people say that there is land beyond the mountains, but they seem to be impassable.  Roaming throughout the frozen are large mammoths, giant polar bears, seals, large birds.  There is even an active volcano known as the "Grim Peak".

Deep within the mountain range a large asteroid crash landed years ago.  Folks refer to the event as the "great awakening".  Rumbles were heard as far as south as Regla desert.   Some attempts have been made to find it, all of which have been unsuccessful.

1.  A merchant is looking to hire a guard to help him travel to the famed city of Yahleui.
2. A local healer wants to visit "Grim Peak", he believe's that there are plants that grow on the mountain side that have healing properties.
3. A task force is being setup to curb the aggressiveness of the Gandalah.
4.  A wild eyed barbarian claims to have seen strange beings within the mountain ranges of the Frozen.
5.  Fires have spread through out the mountains, some fear that they will make there way to the Village of Tilla.
6.  A ship builder wants to test out a new design and is looking for some hero's to accompany him on a trip south.
7.  Pirates have been spotted in the waters east of Tilla
8.  A vile sorceress is hunting nomads near Tilla.
9.  The dead have risen, all of the past deceased buried in a graveyard on the outskirts of Tilla, have started to rise.  Some believe this is a harmful omen of the end times.
10.  A local entrepreneur is looking for people to help scout the mountain ranges for a suitbale mine.