Random encounters at the Keep 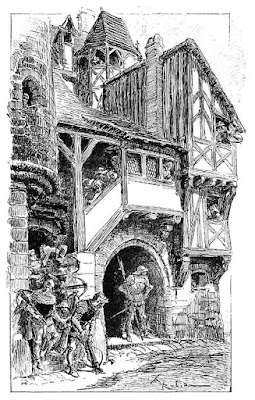 So in our old school campaign, at some point the PC's are going to make their way to Elerd's Keep.  Here's the thing about the keep, yes it has all the usual troupes associated with a keep.  The tavern, the blacksmith, some guys dressed in armour guarding the joint.  Oh and there's the Lord who rules the whole thing.  And you know what he's kind of a good guy.  He treats his citizens well, including the farmers from the surrounding lands.  He has even been known to order in extra food for them by the wagon load.  Here's the thing though, and most of these citizens have heard stories from their grandfathers, Lord Elerd is a vampire.  No not the Strahd kind.  The "I'm a vampire, and I hunt evil things, and animals" louis kinda vampire.

I've been outlining the keep, and since I can't quite draw the keep well enough, I will probably use this map. - http://paratime.ca/images/fantasy/bluecastle001b.jpg

I know you might be saying "Hey Shane you got KOTB why not use that".  Because then I'll run KOTB and I don't really want to right now.  So instead I'm looking at numbers on a map going, Hmm what goes there?

What I have realized is that I'm going to need the PC's to have a few little nuggets of adventures within the keep, so here's some rumours.
Rumours

1.  I heard the Capn' of the guard was given a dishonorable discharge, although I don't know why!

2.  We've been waiting quite awhile for a shipment from the west, something must have slowed the merchant caravan down.

3.  Is it just me or do you hear wolves howling at night? No... maybe its just me then.

4.  That latest batch of mead at the "insert silly tavern name here" is quite good!  I swear I can fly after a few flagons.

5.  Everyone knows there's no ruins or dungeons under the castle, that's just made up to keep us in order.  I don't remember the last time someone was imprisoned for anything.

6.  Interestingly enough there's been quite a few disappearances latetly, no not people I know, but you know you here these things and your start to wonder.

7.  Just latetly I noticed a group of 10 hob goblins come strolling into the keep.  The guards let them in without a fuss, and they went straight up to Elerds keep.  Strange isn't it?

8.  I swear those wandering gypsys are really witches!  They were here and I talked to them, and wow did they give me the skivvies!

9.  I really doubt that the guard is prepared for any kind of an attack, they all seem fat and lazy to me.  Their swords are rusted.

10.  The other day, no word of a lie, I saw a giant frog appear out of nowhere!  And then... wait for it, you don't believe me do you? Well that durn frog turned into a beautiful lady.  She seemed a bit confused but brought some fruit off me.

Side note, I want to release this.  Not for sale, just as a download.  I had talked about an open source project and this might be the thing I do.  The cool thing about open source and using creative commons is you can really flex your layout muscles!  and of course your writing.  Besides, I love old book illustrations!  Could be a lot of fun.  The question is can I put it up on drivethru for free? I would guess so.  Especially with any creative commons stuff it would have to be for free.  As I wouldn't want to make any money off of people.  Right K that was random! Much like the above table.


Posted by shanepatrickward at 2:14 PM