A brief look at the "form" - Pyramid Of The Lost King

A little more information regard "the Pyramid of the lost king".  This time a introduction of a new race.  "The Form".

Rather than copy & paste text from the book, we are introduced to a race of intelligent, giant ants who live within the desert surrounding basq.  They are known as "the form", and they are believed to have access to dangerous technology. 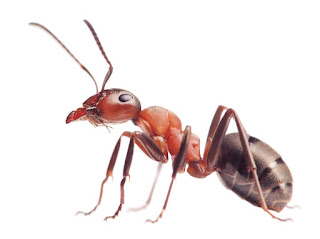 Naturally they are of hive mind.  Which leads me to believe, that once the adventurer's figure this out they may go straight for the Queen in an attempt to destroy the race.  Obviously this maybe thru a rumour, or thru meeting a group of mysterious individual that also make their home in the Desert.  Of course these mysterious individuals will remain a mystery for the time being.

Now, as someone who tends to get the creepy crawlies when it comes to bugs, giant anything makes me super queasy!  However I do love running these types of creatures as a gamesmaster.  Having a hive mind in combat could also be quite interesting.

The heroes are in a fight with a bunch of giant ants, they are all spread out all over the place.  One hero per ant.  Now depending on initiate order, one ant might be aware that another PC is sneaking up on them, as another ant is letting them know about it thru some sort of crazy ant ESP.  That'll f**k with your players.

Player:  Alright I'm going to sneak up and stab the giant ant thing in the back.

GM:  The ant turns towards you just at the moment that you were going to stab him, it pushes your dagger away with a stroke of one of its limbs, what do you do now?

Oh this is going to be a riot.

Now as far as this tech is concerned, I do need to read a bit more of the manuscript that I have, but its got me thinking.  If I was the leader of a race of giant scary bugs with access to technology, what would I do? Would I attempt to dominate the races around me?  Would I try and sell this tech to the highest bidder? What is the end goal?

I love this kind of stuff, as you can tell its already got me thinking about what happens next.

End Goals Of The Form 1d8

1.  To hide away technology from the prying eyes of other races.

2.  To acquire all other lost technology for safe keeping.

3.  To enslave all the other races under one hive mind rule, possibly with forms of mutation and mind control

4.  To create alliances with the other races, in order to increase trade.

6.  To sell off all technology to the highest bidder.

7.  To procreate with other races, in order to create a new hybrid.

8.  To explore the rest of the outlying areas, in search of technology, races, etc.  They believe themselves to be the great "scribes" of the world.  Keeping records of everything, and studying the world as it is and how it is changing.

Now obviously none of these maybe the case, or maybe bits and pieces of these are the case.  Who knows!  This is the great thing about the writing in this book.  It's already got my juices flowing as to what happens next.

Pyramid Of The Lost King Kickstarter


Posted by shanepatrickward at 7:28 AM