Rambling
Operation Consolidation begins this morning.  Yesterday I spent far too much time "at work", working on 3 Toadstools stuff.  In the end, I felt mildy bad about it.  However the systemic issue is that I'm quite bored, and beat down for the most part (as far as work life goes).  That said I came to the utter realization that I should not be doing writing stuff while working (other than blogging).  So in order for myself to stop that, I'm currently dumping everything on my work computer onto a stick.  Then I'm dumping all the files I have on google drive onto the stick, and everything on my home computer on to the stick.  You get the gist.

After that I'll be spending some time doing file management.  I got percentage of the stuff is going to go into a folder called "half cocked ideas".

Once that is done, I know I'll feel a bit better.

The good news is I got a decent sized stick to throw all this on.  I received a press kit in the mail on a 8 GIG stick, just renamed it hahah.

A.D.D writers table. Roll a d12
1. Do some layout work2. Scrap what your doing re-roll 3. Message someone and see if you can fart around with layouts on their stuff. 4. Consider learning how to draw. Draw something, proceed to #2.5. Work on writing some short fiction6. Design a new character class7. Come up with grand scheme to create super basic awesome rules. 8. Draw a map.9. Play around with GIMP/Photoshop for no actual reason.10. Consider taking an older adventure and repopulating the whole thing for giggles. 11. Create a random table 12. Come up with a name for something, create a title page, stop what your doing after that. 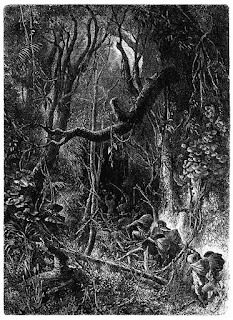 In the meantime I've finished re-reading Mutant Future, and have slowly been copying and pasting a PILE of awesome tables from http://swordsandstitchery.blogspot.ca/

What i'm going to do is write up a small hex map using http://www.welshpiper.com/hex-templates/

Once I fill that bad boy, put 2 towns I'll be ready to go.  This is the first time that I plan to run a completely open world for my players. I'm going to stock it with some cool adventures from http://wizardawn.and-mag.com/ and I'll be off and running.

I just finished watching the last episode of Walking Dead season 6, and it gave me a great idea for Mutant Future.  As far as factions are concerned, having one faction that doesn't want to fight and can offer medical help.  Another faction of people just trying to survive.  And the last faction being Neegan's faction, who think they can run everything.  Of course among all the rest of the problems associated with the post apocalyptic world.  I do want this to be extremely gonzo though.  While I wasn't a big fan of "Famine In Far-Go", the whole chicken processing plant was extremely hillarious.  I need to incorporate things like that as much as possible.

Posted by shanepatrickward at 7:09 AM