I'm not good at math, not at all.  I used to however be not to bad at basic programming back in the day.  (I'm wondering if there's some kind of download nowadays?).  The random thought that appeared in my head the other day was:  Wouldn't it be cool to build a program to run mock battles?

Inherently D&D is a bit about math and Statistical probabilities, however numbers are a lot less fun than actually rolling dice and acting like a drunk dwarf right!

Here's what I was thinking however, If there was a way to build a program with the following:
*4 heroes with all stats, at whatever level you pick.
*the ability to input bad guy stats
*the ability to run a battle just from a statistical standpoint.

The reason for this is quite simple, when designing an adventure the designer will usually state "This is for EX amount of players of EX level".   Now in order to determine that you're going to have to run the numbers.  When I've written adventures I've play tested them, and I've actually sat and ran mock battles on paper, with a pile of dice rolling.  However having a computer program that could do it for you would be super handy.  (Although a little less fun).

Alright on to less boring things. 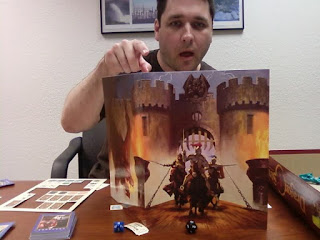 Tonight old school D&D, I have yet to write up a play report for last time, but it wasn't the most exciting session.  The gist is the players wandered around a alternate plane of existence.  To which they mistakenly fell in.  I'm going to have to check over the players notes tonight before we start.  As well I'm going to try and print the basic fantasy GM screen.  Eventually when I get a bit of time, I'd like to consolidate that GM screen and make it portrait instead of landscape.  And then paperclip it to my old gamma world screen, or my dragon strike screen.

After this evening, the players should hopefully be out of the demonic dungeon they are currently trapped in.  Then depending on where they go next I have a few things written up, including a possible big battle.  I need to take 4 sheets of graph paper and create a bit of a basic battle map, atleast as far as where everything is located.  The players have been sent on a mission to destroy a supply line of the Hobgoblin hoard.  Below is a terrible picture of what the general area looks like.  I had made a bit of a mistake, by making the encounters in the dungeon a bit easier (hence the above Statistical probabilities thing), but I think tonight I'll throw some of the bad guys back in there.  Cuz I'm an ass like that. There is a pile of hobgoblins & goblin minions about.  In the supply area is a lot of rations, and various armour, weapons etc.  The cabin is a makeshift prison.  To the right is the edge of a forest.  In the tower are battle plans and mage locked in the tallest section.

While I've been enjoying this campaign, I'd really like to try something a bit different.  In the next month or so the PC's should probably wrap up most of it.  After that, they may follow the lead to the Isle of dread that I gave them, or we might start something new.  I've been really itching to play Mutant Future.

Posted by shanepatrickward at 7:06 AM