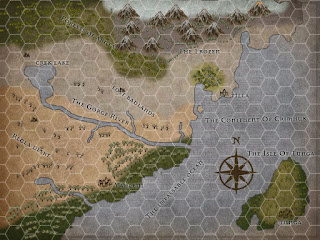 While I was going thru an editing some of my pages within the blog, I stopped by Crimhuck.  If you remember I was posting about this world, as I was basically world building it.

Here are things that I'm pondering as I move forward with a bit more writing on the subject.

While I have been a fan in some cases of a "stock" setting that gamesmasters can use to create their own adventures.  I want to do something a bit more.  What I would like to do is have a book with not only the setting, but a pile of adventures, some new monsters, classes etc.  Because I find just handing a setting over to someone, while cool, the reader may want more.  Now in some cases what inevitably ends up happening is a pile of books come out on the subject.  I don't want to do this.  I need to figure out a way to have it self contained.

Now as far as a muse goes, I'm all over the damn place, and I'm trying to figure out if its cool, or if it's not.

Here is the quick run down.

Crimhuck has been around for a long time, longer than the inhabitants are aware of.  To a degree it is a bit of the "borderland" world, a lot of unexplored places.

There's no real fantasy types monsters, but there are dinosaurs.

There's left over tech from an ancient race that built most everything with steam power.

There's a good chance that Aliens are also visiting Crimhuck.

So the question that comes to my mind, is "is it too much?"

To write something that is post apocalyptic, same thing really.  It's been done, and done well.

To write a lost world setting, yeah you guessed it, it's been done and its been done well.

The other random thing that comes to my mind, is does this need its own set of rules? Obviously it would be easy to just go ahead and use the awesome clones that are out there.  But it does beg the question of "instead of having errata and addendum to a set of rules" why not create some new ones?

*side note you can totally go and steal this idea, I honestly shouldn't be posting about this, but its good to get it out of my system.

**pps and yes I am fully aware that I have far to many coals on the fire.