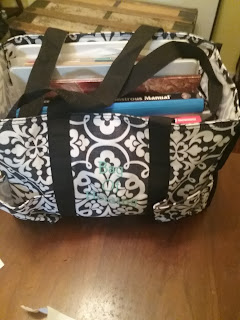 Last night, I packed up my new "bag of holding" with everything, got in the car and drove off to one of our players houses to play some Basic Fantasy!  When we last left off the players were in a alternate astral plane, that appeared to be demonic in nature.

Unfortunately I totally forgot the most important thing! The character sheets!

We realized that I had forgot them half way there.  Luckily I had a copy of a B/X reprint that was given to me (thanks Tony!) and I had a trusty copy of Keep on the borderlands.  So I thought, "worse case we play some murderhobos at the keep".  Which I've always wanted to run.

Once we got there we had a brief discussion about it, and it was decided that David would try his hand at GMing for the first time.  He had written a 5 page backstory about a large island with a long dead volcano.  Because he is a philosophy major he started writing this world to basically help him study.  So there's a pile of things in the 5 page document that related to his course.  A bit of it was sprinkled with some High Valyarian as well.

We all rolled up some characters, which seriously took all of 30 minutes for 5 people to create. (God I love old school character building!)

We showed up in this town called FOB (fresh off the boat) as that was basically us, we had been on this boat travelling to this island because we had heard that it was filled with treasure and adventure.  During the evening of our first stay most of the town burnt down because of some bridgands.  We decided to talk with some of the townsfolk, and got an idea of where the bridgands had went.  Instead of chasing them down however, we made it to the capital.  Or atleast that was the plan.  The capital was on the other side of the volcano.

During the night we heard a scream, and went and investigated.  We came across some stirges attacking a fairly androgynous person.   My character had rolled a 3 for dex.  I decided to sling a stone at the stirges.  So with my attack bonus and a -3 modifier to a ranged attack, I was running at -2 basically on my rolls.  Entertaining!

We helped out the person, who turned out to be some kind of crazy myrage!  Then went to bed.

Next day, we are travelling to the capital and run into a pack of goblins!  Now I forgot to mention that we had decided to help out a lady who owned an orphanage, she was transporting 17 kids to the capital.

The goblins wanted to eat the kids.  I decided to pay them off.  25 GPs.  There was a bit of a discussion about possibly firing arrows at them as they walked away.

Alright we make it to the capital.  Turns out there are 5 kings within the capital, all descendants of the original inhabitants of the kingdom.  (The knight, farmer, and 3 more... basically like houses).  The way the city is run is thru a process of voting between the 5 kings.  However one of the kings is deposed or dead, and an heir hasn't been found that meets the correct requirements!  Plot twist!

We then met with the religious order in the city of Moardron.  (which the island is also named after).  The person we met had a major stutter, which was interesting.  They were quite happy that we saved the children.

A few more plot lines & adventure hooks developed, and then we left it there for the night.  The DM took home the character sheets and the maps I drew while playing.  (I sat and drew up the city, the ruined village and a cave complex map for him while playing!)

I have to say David did a fucking amazing job for being put on the spot.  He did everything off the cuff like a great DM! Awesome! 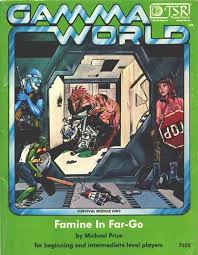 Side note:  I grabbed my copy of Mutant Future back and spent sometime reading it last night.  I have a copy of Famine At Far-go that I plan to run soon.  So my basic fantasy campaign is going to take a back burner.  Which we discussed a bit, I basically said that I had originally thought it was going to be a one shot and was a bit ill prepared to continue the campaign as it stands.  I think what is going to happen is that Kurt is going to finish up the campaign I started, we are going to run with Davids new campaign and I'm going to run some Mutant future.  So we have more than enough games to play at this point.  WOO!


Posted by shanepatrickward at 7:16 AM