A bit of nostalgia

As usual every morning I got thru my memories on the blue social network, and I came across this. 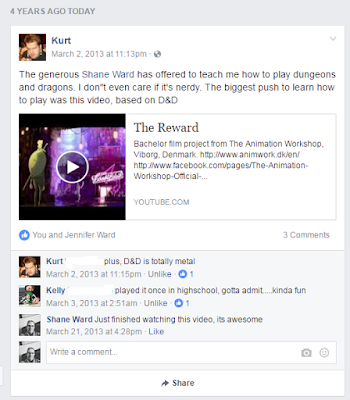 Since that time (4 years ago!) my cousin in law has acquired massive amounts of dice, ran a few games as a DM using BFRPG, and is now playing in 3 campaigns! Our old school one, a 3.5 game and our 5e game! Awesome sauce.

Latetly another friend of mine on the blue network has been posting some awesome dice shaming pictures, which is leading to more discussions about D&D.  This is also good!

If I remember correctly the first game I ran for Kurt and my Wife was "Keep on the borderlands" using BlueHolme.  It was a fun evening.  They started out as murderhobos the first few games.  But quickly got the hang out role playing.  Which has lead to a bunch of sessions where we have basically talked for 3+ hours!

If you haven't watched "The Reward" yet, it's posted below.  Great flick.

And now on to other bits of rambling.

I've decided to drop my mutant future campaign planning for the time being.  I think the next time the old school group meets, we will probably continue with our current campaign, which is totally cool with me.  While I did complain a bit about Famine In Far Go, after a secondary read, I think it would make for an interesting one shot when the time comes.

In the mean time I am going to work on a one shot 5e adventure.  As you know we have been running Curse Of Strahd, and it's been a lot of fun.  However I'd like to have something prepped for whenever our DM gets a bit pooped out.

The other DM in our group has been busy running a campaign online, so his head is filled up with that.  Had a brief discussion about returning to the Abyss, but I think he has enough on his plate currently.

Now that "An Invitation From The Blue Baron" is basically complete, I've been slowly wondering what my next project is going to be.  Before I completely put the Baron to bed, I'd like to re jigger the layout for a black & white 8.5x11 print.  Mostly because for myself that's the easiest thing to print at home, and I'm guessing there are a few other people like that out there as well.  In the next little while I'm going to prep a file for lulu so I can print a few of them (original 6x9 version).

So the next project is one that has been driving me nuts for a very long time.  I think I'm going to start by re drawing maps, and then do a wholesale re-write.  I'm not promising anything, but I really need to finish that darn mega dungeon.  I feel like I'm in a good place now to tackle it.  The other thing that I would like to do, is to attempt to do all the art.  This is going to mean that I'm going to have to grab a "how to draw" art book and start drawing, throwing those out and drawing some more.  This is a good thing! It's a hobby, so I'm going to friggin learn how to do this.  Because this project has been an on going thing for so long, my brain has had enough time to marinate and figure out things, specifically what sucked balls in the initial draft, and what was somewhat cool.  Having just finished working on the Blue Baron, I found myself really enjoying writing with Blueholme in mind, so this project maybe specifically for those rules.  Obviously we will see how it goes, but I did find it quite easy to write for it.

I should note, that the purpose behind the Blue Baron was to do something creative, with a collective group of creative minds.  To a selfish degree it was a way of  kicking myself in the ass.  See this post.  I am extremely happy with the results.  And it has given me a much needed boost.

Alright that's enough for me this morning, have a good one!