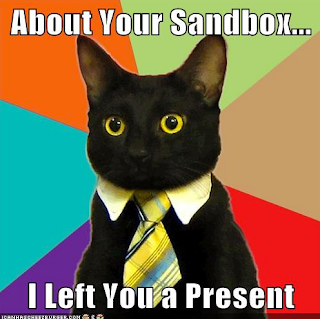 I was discussing with one of my friends about our "out of the abyss" campaign the other day.  Eventually we will be going back to it, probably after we finish up killing strahd.  He had mentioned that he feels he is going to need to do some subtle rail roading to get us back on track.  As well he plans to level us up, hand wave to eighth level.  I think we are currently at 5th or something.  The gist is "we have been adventuring on and off, and have since leveled up".

I have no idea if he is going to read this post, but I have a few thoughts on it, some of which are personal and some of which are more straight and to the point (common practices).  Obviously it's his game, and he can run it exactly the way he wants.

First off, I've done a bit of hand waving as far as levels are concerned, but honestly it takes away player agency, the reward of having survived and a job well done. In my next fifth edition campaign I won't be doing that at all.  (that goes for old school games as well).  The players will level as they collect enough experience, end of story.  I don't much care for CR levels, but I'll obviously not throw super scary monsters at them.  Of course the world is a big place and not all monsters are at your level.

This practice of the hand wave rubbed off on another player.  After having played a few sessions of "abyss" and got leveled up by a hand wave.  The player played in a old school session with me, and after 2 sessions he was looking for the hand wave from me.  Obviously different DM, different game entirely.  That said it should not be an expected thing. And honestly though what is the rush? It's D&D campaigns go on for years.

Now onto rail-roading.  As most of you know railroading isn't a practice that happens often in old school games, (mostly because the game is different).  We all know that despite how much you plan and prep, nine times out of ten the players will blow holes in that plan anyways.  Which is why attempting to run a module exactly as written probably rarely works.

For me if there are encounters that I would like to see happen to keep the game going, I will figure out a way to work them in.  Or if I had a cool dungeon I wrote up and the players don't take the bait, it's relatively easy to work it in.  Bearing in mind that the players don't have access to behind the screen, the world map were you carefully placed the dungeon miles away from the players current location.

I can say though, that I've honestly rail-roaded players before and probably will do it again.  The last time it happened I honestly couldn't think of any other way to get them into the dungeon, so I forced a weirdness on them.  The players were standing over a portal leading to a alternate dimensions.  They hadn't quite decided what they were going to do.  I didn't have a lot else prepped.  So the one hireling npc with them jumped into the portal!  Yup that's a lot of hand holding.  Looking back on it now, what could have worked was a demon coming thru the portal and grabbing someone, maybe they got pulled in, maybe not.  Maybe the demon pulled the npc in? Who knows, but that would have been better.

That being said it's pretty easy to just re-write bits and make it work, as long as your creativity is clicking that day.  As well I think that more you play, the more you DM, the better you get at it.  You get comfy and just figure it out.  I have personally been wanting to run a big open sandbox, while it can be a bit overwhelming if you do some reasonable prep it's not that bad.  As stated before I'd love to run black marsh, and there is no end to modules & adventures you can find out there to pop into a open sandbox world.


Posted by shanepatrickward at 10:35 AM