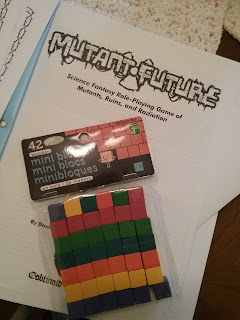 In the interest of being an el cheapo Canadian, I stopped at Dollarama yesterday to grab some minis.  I was looking for the cool coloured rock crystals that you see at gaming stores, but I was only able to find ones that had 2 different colours.  I had read somewhere that using the rocks for your spells slots in 5e is a handy technique.  I managed to find these fun little building blocks instead.

When I get some time I'm also going to number the blocks with a felt pen, which should make combat infinitely easier.

Awhile ago we played in our "out of the abyss" game, and we had got the DM some pathfinder minis for his birthday.  (one of the PF boxes).  While most of the monsters are pathfinder specific demon things, what the DM did was just use them as props/minis basically.  The idea was that creature on the card had nothing to do with what we were actually fighting (picture is a stringy looking demon, we are fighting orcs).  What I found though was the colour coding was crazy handy for tactics and keeping track of things.

As I stated in my post the other day on this:

That combined with my home made battle mat I've been using since I started, should make combat relatively easy. 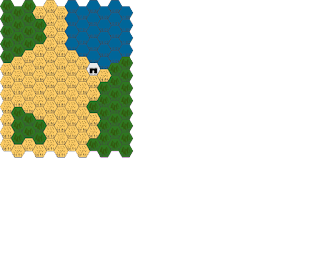 Update on MF campaign:  Well yesterday evening got away from me, I managed to re-read a lot of the rules in the book.  Reading thru the monsters and gear I got a few ideas here and there for scenarios.  Yesterday afternoon I made a quick hex map with hexographer.  I may just have to wing the whole situation.  The good news is we are going to go thru character creation which should take a bit of time. Chances are the procrastination is going to kick in, and I'll be writing the night before.

Posted by shanepatrickward at 6:58 AM

Email ThisBlogThis!Share to TwitterShare to FacebookShare to Pinterest
Labels: gaming on the cheap, mutant future.